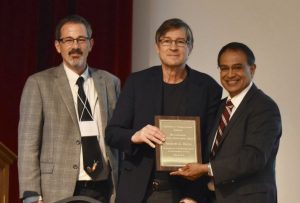 May was an exciting time for the Neurosciences at UMass and more is planned for the summer like the inaugural Neuroscience Summer Seminar Series.
The Interdisciplinary Neurosciences Conference was a great success and started a conversation on campus between the neurosciences and engineering. The Workshop on Methods in Systems Neuroscience and Neurotechnology,  laid out some of the newest techniques for understanding complex brain circuitry. Andy Barto was awarded a UMass Neurosciences Lifetime Achievement Award by Chancellor Subbaswamy. Tributes to Andy poured in from leaders in the fields of Machine Learning and Reinforcement learning.  Here is just a small sample.

Richard Sutton (Andy’s co-author on Reinforcement Learning)
Professor, Computing Science,University of Alberta
“…It is not too strong to say that Andy created the burgeoning field of modern reinforcement learning. He created it partly through his research and the research of his students, but a field’s success is due to more than just its research results. As I have grown older I have gained a deeper appreciation of Andy’s contribution in setting the tone of the field. That tone is an emphasis on scholarship, on humility, and on openness—on welcoming all fields and all people for whatever contributions they can make…”
Wolfram Schultz (Last year’s keynote speaker)
Professor of Neuroscience, University of Cambridge
“The work of Andy Barto and Rich Sutton is not only a milestone for machine learning but also a huge achievement for neuroscience. Their theory of temporal difference learning represents the next step after Pavlov’s learning experiments and greatly helped to interpret the reward signal of dopamine neurons, which, in turn, provide a biological implementation of their theoretical constructs.”
Terrence Sejnowski
Francis Crick Professor, The Salk Institute for Biological Studies
“A remarkable convergence has occurred between artificial intelligence and neuroscience over the last decade. The key to this convergence has been based on implicit learning from experience rather than writing explicit computer programs. Andy Barto was a pioneer in developing learning algorithms inspired by biological systems long before it became popular.”
Peter Dayan
Director, Max Planck Institute for Biological Cybernetics,Tübingen, Germany.
“…His contributions are marked by a most impressive mix of deep intuition about the nature of a fundamental problem that is both important and likely to be tractable, a subtle understanding of the balance between rigour and practicality, and a clarity of communication that allows his insights and ideas to spread widely. …”

You can read all of the tributes in their entirety here.

It is hard to overestimate the effect that Andy has had in neuroscience and engineering. I hope that we can build on that legacy as we move forward in the neurosciences at UMass.