Although all of the NSB students are outstanding. Each year awards are presented to recognize particular achievements. The Vincent Dethier Award pays tribute to an NSB graduate student, honoring academic and research performance as well as contributions that enhance the quality of the NSB Program.  The award consists of a certificate, a cash award, and a book – To Know a Fly by Vincent G. Dethier, the first Graduate Director of the NSB program. This year there was a tie for the prize: Adaeze Egwuatu and Nicole Lee. The Gold Neuron award, which celebrates an exciting finding from any graduate student in the NSB program in the past year, was awarded to Joseph Dwyer. The Early Career Award, which recognizes a1st or 2nd year PhD student who demonstrates excellence in academics, research, and/or outreach, was given to Phoenix Quinlan.

Adaeze is a student Jennifer McDermott’s lab in the field of cognitive and affective neuroscience. She was the GEO representative and president of the NSB student association. She received a AAAS CASE (Catalyzing Advocacy in Science and Engineering) fellowship to attend a science advocacy workshop in Washington and she has been involved in the PREP, NEAGEP, and Spaulding-Smith programs. Her advisor says, “Adaeze is the full package of scholar, scientist and advocate. Her motivation to always grow as ascientist, combined with her tenacious passion for supporting others, is inspiring.”

Nicole Lee is a student in Annaliese Beery’s lab and works on same sex social preference in prairie voles. She was a STEM ambassador and played a leadership role in creating “Thought Space”. Recently, she was a finalist for a UMass Distinguished Teaching Award. Her advisor says that Nicole “exemplifies each of the categories of the award: excellence in research productivity, academic performance, and contributions to the NSB program.” 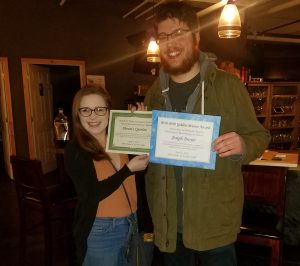 Joseph Dyer, winner of the Golden Neuron Award, is a student in Joseph Bergan’s lab and has developed a strategy to accelerate the penetration of antibodies into large tissue samples. This work has been submitted as “Accelerated clearing and molecular labeling of large tissue samples using magnetohydrodynamic forces”, was presented at SfN, and has been awarded a provisional patent. Joe’s paper describes two closely related strategies that use electrical and magnetic fields to accelerate the movement of charged molecules into and out of a tissue sample. Together, these strategies allow us to render large tissue samples transparent for imaging and interrogate the molecular organization with antibodies.

Phoenix Quinlan, winner of the Early Career Award, is a student in Paul Katz’s lab. She recently attended the prestigious Neural Systems & Behavior course at the MBL in Woods Hole. She received a UMass Predissertation Research grant, which she used to study microfabrication. She has also attended a workshop on machine learning for behavioral analysis. She has been an outstanding mentor of undergraduates and a leader in outreach.