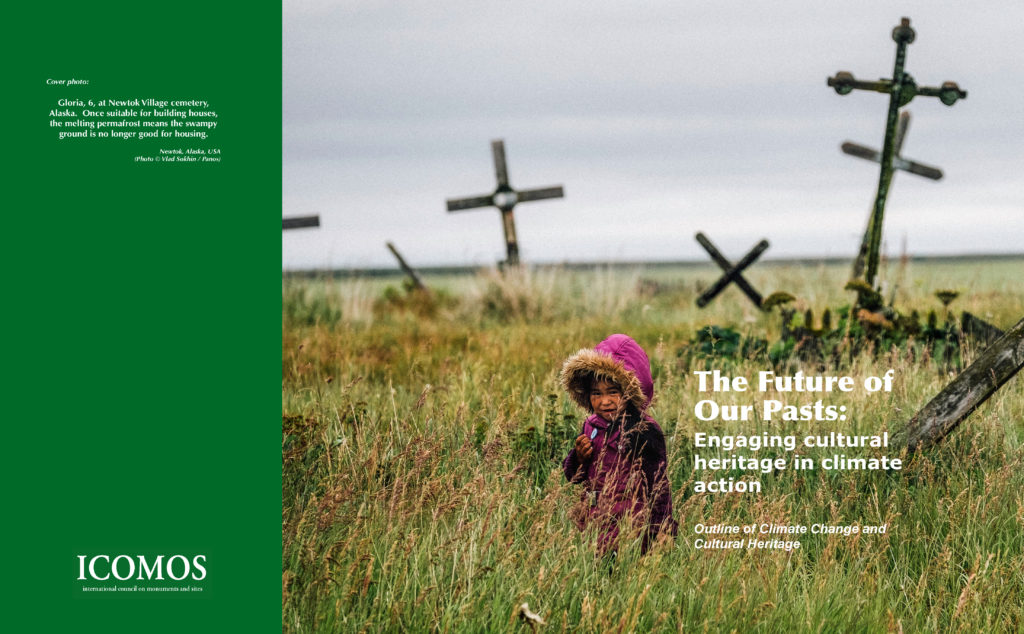 On July 3rd, 2019, the Climate Change and Heritage Working Group of ICOMOS delivered a new report on the critical importance of  heritage issues to international climate change policy, to the States Parties of the World Heritage Committee.  Titled “The Future of Our Pasts: Engaging Cultural Heritage in Climate Action,”  the report was co-published by ICOMOS and the Center for Heritage and Society with funding by the Worldwide Universities Network (WUN).

The Intergovernmental Panel on Climate Change (IPCC) has said that achieving the Paris Agreement’s ambition of limiting global warming to 1.5ºC above pre-industrial levels would require “rapid and far-reaching” transitions in land, energy, industry, buildings, transport, and cities.  Acknowledging and harnessing the power of multiple aspects of cultural heritage would increase the ambition for — and effectiveness of –transformative change, the ICOMOS report released Wednesday concluded.  Cultural heritage affects community resilience, the impact of climate-induced migration on individuals and their communities, ways in which communities adapt to climate change through traditional and indigenous knowledge, and in the form of iconic sites, serves as a barometer of local changes in climate.

The “Future of Our Pasts” report was prepared under the scientific leadership of ICOMOS’s Climate Change and Heritage Working Group. The ICOMOS Triennial General Assembly held in 2017 in New Delhi, India adopted Resolution 19GA 2017/30 entitled ‘Mobilizing ICOMOS and the Cultural Heritage Community To Help Meet the Challenge of Climate.’ (see Resolutions p. 18) The Climate Change and Cultural Heritage Working Group was formed in order to further the resolution’s ambitious aims.

(1) Develop and coordinate ICOMOS inputs into the update of the 2007 World Heritage Committee “Policy Document on the Impacts of Climate Change on World Heritage Properties.” This will include soliciting and collecting inputs from various ICOMOS constituencies including National Committee and International Scientific Committees, synthesizing those inputs and offering them in a timely and helpful matter to the joint UNESCO-ICCROM-IUCN-ICOMOS Policy update process.

(2) Develop a draft global climate change organizational engagement program for ICOMOS (the “Roadmap”). The ICOMOS Roadmap would suggest a framework for comprehensive engagement by ICOMOS members on climate change including suggested activities and areas of engagement and responsibility for various ICOMOS International Scientific Committees, National Committees, specialized bodies and the Secretariat.

(3) Coordinating the drafting of a new ICOMOS Charter on Climate Change and Heritage. A charter is ICOMOS’s most formal type of international doctrinal document, addressing heritage and conservation as a discipline. The consideration and adoption of charters is governed by specific procedures set out in the ICOMOS Rules of Procedure. The pursuit of Charter as a capstone to the Working Group efforts is advisable both because the outcome will provide authoritative guidance on best practices for the managing of heritage in the face of climate change but also because the inclusive process is required for charter consideration is perhaps the most comprehensive way to engage ICOMOS members on a topic. The charter is expected to be a map to the Policy Document but will include all types of cultural heritage (not just World Heritage) and may extend to areas that the WHC chooses not to include in its Policy for political or other reasons. Target completion draft: October 2019 (final draft submission at ICOMOS annual general meeting; Rabat, Morocco); October 2020: adoption at the 20th ICOMOS General Assembly (Sydney, Australia).

More on the Working Group’s brief can be accessed here.