Thirty years after the publication of “Dealing With Change in the Connecticut River Valley,” a widely acclaimed publication for the landscape planning profession, is a perfect time to reflect on the impact writing about new thoughts and ideas can have.

And the tremendous impact on the public that planning and design imaging can have.  As a model for “scenario testing,” the images from “Dealing With Change” had tremendous impact nationally and internationally. The original book went through seven reprints (by the Lincoln Land Institute and The Environmental Law Foundation), before it was revised into the book “Rural by Design” and published by the American Planning Association (now Routledge). That created a long term impact for a planning project and the core of a landscape planning approach to be in print.

Some history …. In 1986 a group of committed planners and landscape architects came together at the fledgling Center for Rural Massachusetts (CRM) at the University of Massachusetts, to deal with the challenges of rampant growth and development in the Valley.  Housed in the Department of Landscape Architecture and Regional Planning, the Center for Rural Massachusetts was created to advocate for measured, sustainable growth in rural communities.  The project that became the book “Dealing with Change in the Connecticut River Valley,” was funded by the Massachusetts Department of Environmental Management and published in 1988 by the Lincoln Institute of Land Policy in Cambridge.  Tapping into a national movement to find ways to manage growth, and into a movement that in the 1990’s was rebranded as sustainable development, the project was lauded as a landscape planning process through which you could have it all – development and environmental conservation.

The project was broadly disseminated and written about:  a New Yorker article by Tony Hiss; a Fortune Magazine “Best Ideas;” part of a book “The Experience of Place: A completely new way of looking at and dealing with our radically changing cities and countryside” by author Tiny Hiss; and given APA and ASLA awards.  It also spawned a follow-up book written by the authors of “Dealing with Change,” published by the American Planning Association titled “Rural by Design,” which was in print continuously for the next 25 years.

Why was this a heritage project?  The project took, as its base goal, the preservation, protection and continuation of the landscape and townscape of communities in the Connecticut River Valley.  An important colonial-era landscape, the Valley was settled between 1640 and about 1682, with successive waves of British immigrants and settlers from the original Bay colonies.  Two towns and their landscapes were included in the book, Hadley and Gill, Massachusetts.  Hadley has a particularly significant cultural landscape, surrounding the mile-long town common, a landscape that was listed on the World Monuments Watch List of Most Endangered Sites in 2010.

So why did this project tap into the zeitgeist of its time, and become a major planning movement?  The book premiered what we would call “scenario testing” today, displaying the impacts of current development patterns on a landscape, and then how that landscape could develop, given creative planning and design tools.  This opportunity to “see” the results of future development was revolutionary.  Citizens could see what their current path of development ordinances and standards would lead to, and could identify more community friendly options.  If there was one down side, it was the fact that the hard choices of development regulations were not always enacted or followed, leaving the resulting development short of its desired mark.

The work in the Connecticut River Valley spawned many long term outcomes:

While growth management was the issue in the late 1980’s and sustainable development the issue in the late 1990’s and early 2000’s, today’s issue is climate change.  This type of approach, melding planning and landscape architecture is needed more than ever in our efforts to face the challenges of our future.  If anything, the immediacy of the problems and their potential solutions have been heightened – with a much shorter time horizon in which to deal with them.

Click on the image to load the slide show ….

Dealing With Change in the Connecticut River Valley 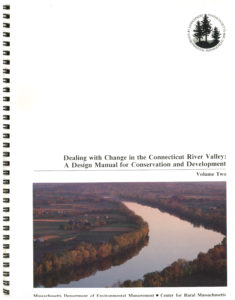 Linking the Past to the Future 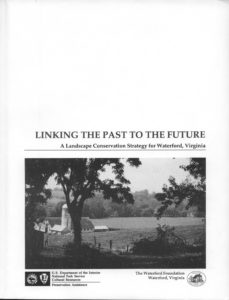