The underlying premise of a water market is that the price of water can be used to indirectly ‘control’ the quantity of water used, or vice versa. Price and quantity have an inverse relationship so that when the available groundwater gets scarcer, the price of water increases. At a higher price of water, some farmers may find that the benefits of selling water are higher than what they would obtain if they used that water to grow crops to sell. This is especially true for inefficient farmers. For efficient farmers who are able to produce a higher yield of crops for a given water usage, buying water allows them to increase their crop production and associate revenues. When enough of these trades happen on a system level, overall system-wide profits for a given volume of water used increase.

We put this theory to the test in the Frenchman Creek Basin using our modeling framework (described in Part 2). In the figure below, we can see the potential benefits of allowing farmers to trade their groundwater allocations. Let me walk you through this graph. As one would expect, when the total groundwater pumping increases, that results in greater economic benefit (farmers have more water to pump, and can grow more crops). The red line shows the economic benefits when agents are provided a uniform allocation and not allowed to exceed that (i.e. quotas on groundwater use). The blue line represents the benefits received when the agents are allowed to trade their allocations. The difference between the red line and the blue line is the change in benefits when farmers are allowed to trade their groundwater allocations. While the red line is linear, the blue line is slightly concave. This suggests that the gains from trading are highest when the initial allocations aren’t extreme, aren’t too low or too high. 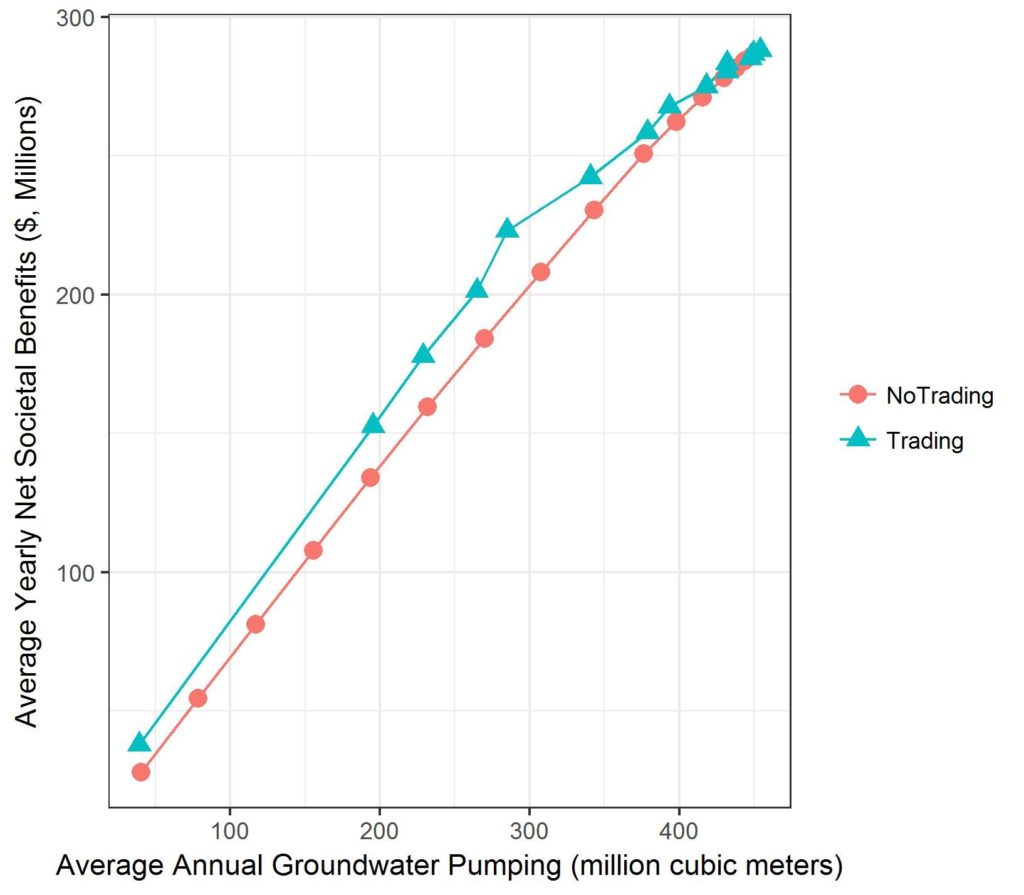 These initial results seem to suggest that in the Frenchman Creek Basin, with the right price of water and, trading of pumping allocations can increase revenues by up to $20 million (~10% of total revenues). While this may seem like a relatively big amount. It is important to note, that currently these results don’t include the costs associated with setting up markets (transaction and transformation costs). To make an effective case for the establishment of a groundwater market, the benefits need to be greater than the costs. We’ll discuss these costs and the effect of incorporating them in our models in the coming blogs.