Casey Brown, Patrick Ray and Sungwook Wi received the Climate Science Service Award from the California Department of Water Resources, presented on November 20, 2014.  The award was in recognition for their work applying the Decision Scaling methodology to assist California assess their vulnerability to climate change.  The work is supported by the DoD Strategic Research and Development Program. More here. 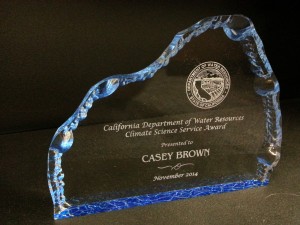 The Hydrosystems Research Group has won a $1.5 million grant from the DoD Strategic Environmental Research and Defense Program (SERDP) to investigate the effects of climate change on flood risk. Read the story here.

Patrick Ray and Casey Brown delivered a workshop on their Decision Tree, a tool for evaluation of climate change risks to new development projects at a World Bank sponsored workshop in Kathmandu, Nepal, September 2014.

Coping with the Curse of Variability – new article published in Science reporting on early work from the Task Force on Water Security.  Casey Brown is a member of the research team led by Prof. Jim Hall at Oxford University.  Article here.

Katherine Lownsbery won a Fulbright award to study in Burkina Faso. Lownsbery, who just completed her M.S. with the Hydrosystems Research Group, will spend the year in Ouguadougou hosted by the Institut International d’Ingénierie de l’Eau et de l’Environnement (2iE – International Institute for Water and Environmental Engineering) before returning for her PhD.

Caitlin Spence, Hassaan Khan, Patrick Ray and Casey Brown traveled to the University of Oxford to participate in a meeting of the Task Force on Water Security in May 2014.  The team is conducting research on the economic effects of hydrologic hazards, like floods and droughts.  The work is sponsored by the Global Water Partnership.