From 2005-2018, I used to write a blog called Thirty Letters In My Name — the title, as you might guess, refers to the imposing length of my first (Hari Jagannathan) and last name (Balasubramanian). That blog contained a mixed bag of topics: travel, history, literature, mathematical concepts that I taught in my courses. Many of the themes I explored eventually turned into longer essays for the website 3 Quarks Daily. I haven’t written much since 2018. The break was due to difficult personal circumstances that required me to slow down and retreat for a while.

Now I feel like writing again. This time, I want to work my way through themes that are very close to my heart: wonders of the natural world, the history and diversity of life on earth, ecology and environmental conservation. I have no formal training in these topics. My academic training, as the rest of this website makes evident, is in mathematical modeling. What little I’ve learned of the natural world comes from bits and pieces assembled from regular hikes in the mountains, forests, and coasts of the American Northeast, and then reading about them in books.

But I suppose one has to begin somewhere. That’s what I hope to do in this version of Thirty Letters In My Name: start writing and see where it leads. Although there might be many pieces related to nature, my other interests — literary fiction, history, travel, movies, concepts in mathematics and probability — are all likely to make a regular appearance. Let’s see how this turns out!

I’ve seen some good Malayalam movies this year. I started with the sequel to Drishyam in February, then over the course of the summer I saw Nayattu, Joji,  Thondimuthalam Driksakhshiyum, and Kumbalangi Nights.

In watching these films, I felt I was encountering a different sensibility altogether, even though the sentimental themes central to Indian plots, such as  family conflicts and romance, were still present. A striking feature was the choice of the actors: rather than cast people who look good in the air-brushed, movie-star way — as often happens with the Hrithik Roshans, Aamir Khans, Aishwarya Rais of Bollywood — these movies appear to have chosen actors straight out of the streets and homes, with mannerisms and gestures that are familiar to everyone. The movies also used the natural beauty of Kerala — streams, backwaters, lush green vegetation — to great effect. Indeed, the directors seemed to revel in portraying the sights of Kerala, its urban and rural landscapes, and there wasn’t a single scene in any of these movies that was set outside of the state.

As I learned later, all is this part of  what’s called New-Gen Malayalam Cinema. Here’s an excerpt from the Wikipedia page:

Erosion of the so-called “superstar” system in popular Malayalam films coincided with rise of the new wave where screenplay got rooted-to-reality, closer-to-life and lead characters became ordinary men and women. Influx of new actors, the absence of superstars, rise of metro-centric/urban and middle-class themes and different story-lines were also noted in the wave. While formats and styles of the new directors are deeply influenced by the global and Indian trends, their thematics were firmly rooted in Malayali life and mind-scape.[6] A recurrent trope in these new narratives is accidents, coincidences, casual encounters and chance meetings that set in motion an unexpected chain of events affecting the lives of the characters…

The movie I liked the most was Dileesh Pothan’s Thondimuthalam Driksakhshiyum (The Exhibits and the Witness). It is about a newly married inter-caste couple, Sreeja (Nimisha Vijayan) and Prasad (Suraj Venjaramoodu). During a bus journey between towns, Sreeja loses her valuable wedding necklace to a petty wandering thief — incidentally also named Prasad (played by Fahaad Faasil). The thief is caught red-handed in the act but the necklace has disappeared.

The bus with all its passengers is diverted to a local police station, and a comedy unfolds there: Has the thief swallowed the necklace? If he has, who will supervise him  when he goes to relieve himself and the necklace pops out? Would a few additional bananas help speed up the delivery? If no necklace emerges, then would an x-ray provide definitive evidence?

The stolen necklace is central to the story, but Dileesh Pothan is equally interested in giving us light-hearted vignettes of small town life involving the station officers and its prisoners. Having travelled through the provincial parts of Tamil Nadu in local buses during my college years, I was quite taken by the authenticity of the small-town milieu depicted in the movie. The film reviewer Baradwaj Rangan puts it well:

Instead of zooming in, narratively speaking, he goes for the wide shot. This is a generous approach to filmmaking. It says that the main characters are a part of the world around them, and this world needs to be acknowledged as well. [link]

What’s additionally elevating about Thondimuthalam Driksakhshiyum is that the characters, although flawed, are essentially sincere, capable of reflecting on their actions. Prasad (the husband) is upset at Sreeja for having been casual about her necklace, thus allowing it to be stolen, but later realizes his judgements have been too harsh. A police inspector who violently interrogates the thief later reflects, in a conversation with his wife, on how poorly he has treated his own son in the past. Even the thief Prasad who in the beginning seems like the epitome of self-centeredness reveals an empathetic side towards the end. The characters are subtly attempting to redeem themselves and this makes for a different kind of feel-good movie.

Earlier this year, on my usual walk through the UMass campus, I passed by a rock that was on display next to the Science Center. I had probably passed it dozens of times before but never noticed it. (Why do things that we miss all the time suddenly catch our attention one fine day?) The rock – dark grey, about four feet wide, two feet tall, sliced to reveal contours in the cross section – was like others in northeastern US: so common and ordinary, it blended into the landscape. But that day I stopped to look at the plaque that was attached to the rock. This is what it said:

“Hawley Formation Pillow Basalt. This basalt was erupted from an arc volcano during subduction and closure of the Iapetus Ocean, approximately 475 million years old. Quarried from Hawley, Massachusetts.” 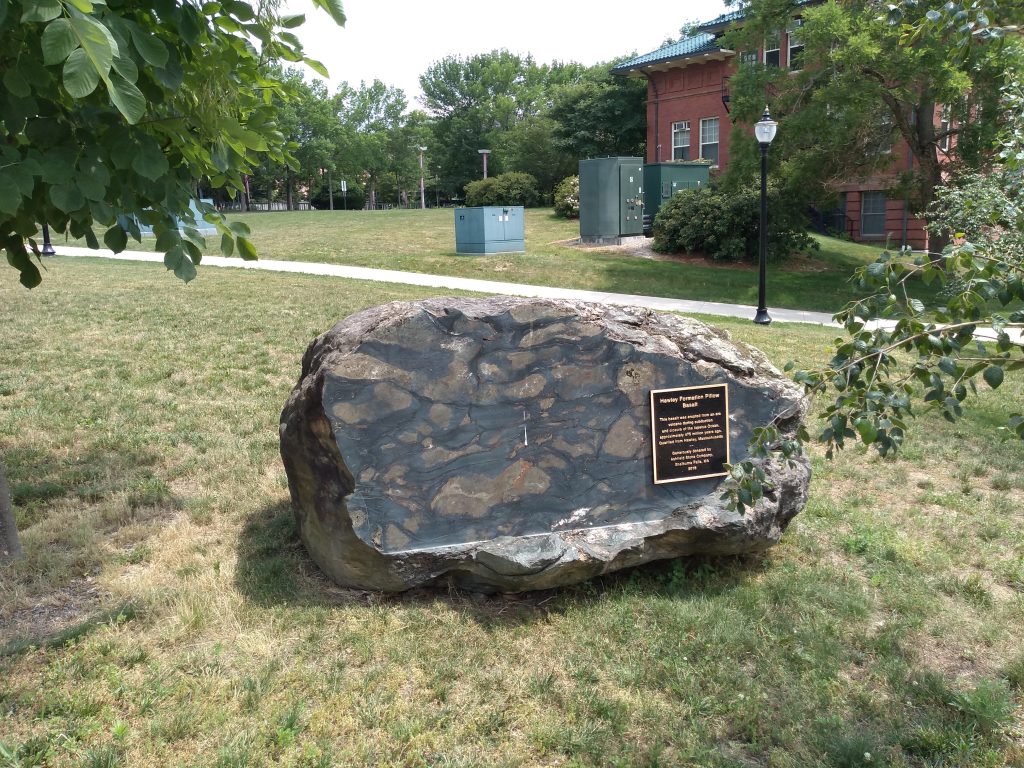 475 million years! I was intrigued: Was this the oldest inanimate solid body that I had ever seen? Had it always more or less retained its shape over millions of years? And what about the exposed rocky cliffs along interstates and the glacier-strewn boulders along hiking trails which I saw so regularly – how old were they?

I had paid little attention to rocks and boulders, but now they have moved to the foreground of my awareness. They have turned into sources of wonder, quiet messengers from an ancient time. And geology itself, which for a long time seemed like a forbidding science – with esoteric terms such as subductions, mantles and moraines – now seems indispensable to understanding the earth’s deep history.

A few weeks later, outside the entrance to the Museum of Science in Boston, I came across rocks displayed in a row. At least two of them were estimated to be 3 billion years old — easily out-competing the UMass rock. Since the earth has been around for 4.5 billion years, I thought: surely now, these museum rocks are the oldest I’ve come across. Again, they were gray — a lighter gray — and not striking to look at. I might not given them a second glance but for the information boards that brought them to life.

This seems to be the great power of scientific narratives: by providing the necessary context they can transform the ordinary into the remarkable.

It’s happened many times, in other contexts. In May 2018, I was walking along a meadow trail in Amherst when birds hovering over the knee-length high grass caught my attention. Their scattered, disorganized calls resembled that of swallows but once I heard them a few times, I got attuned to their unique rhythm. Looking through my binoculars, I spotted a yellow-headed bird with a black and white body. I later identified it as a male bobolink.

Now a bobolink is colorful, but so are other birds. My engagement with this species would have ended with the pleasure that comes with first sightings. But I went online and found that among migrants, bobolinks are particularly impressive, traveling  12,500 miles between North America and western South America each year. A bobolink might live up to 9 years, and in that time, “it may travel the equivalent of 4 or 5 times around the circumference of the earth.”

As with the rocks, the bobolink without the backstory would be yet another meadow bird. But now it’s different. Because now, when I first hear its burbling, metallic calls across the the high grass each spring, there’s a special joy in knowing that travelers from a faraway land have arrived.

Although I’ve seen a lot of monarch butterflies in my years in Massachusetts, and even traveled to the forests of Michoacan in Central Mexico to watch millions of them congregate the winter, I’d never come across a monarch caterpillar. But last month, at a roadside stop in the Adirondack Mountains of upstate New York, I finally saw one squirming on the leaf of a milk weed plant. 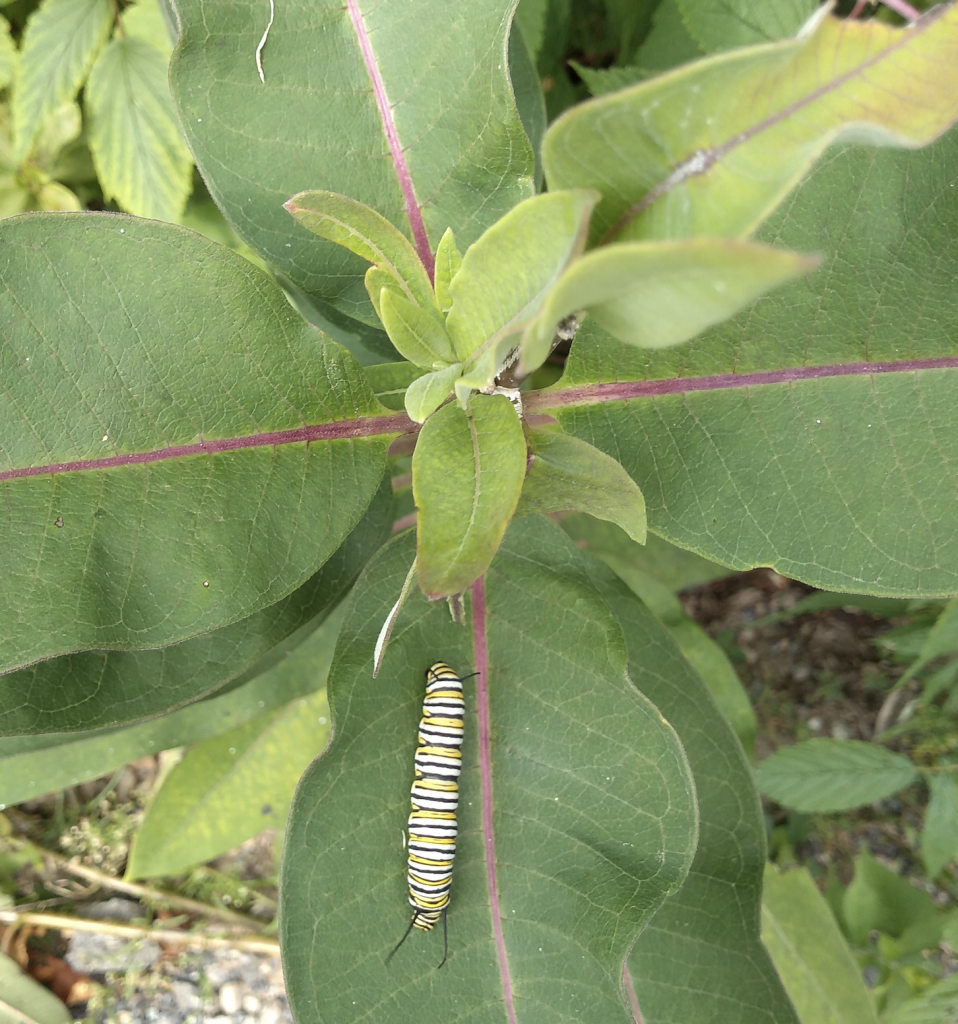 If everything goes well this caterpillar will metamorphose into a butterfly and will — all by itself — make the epic 2000-mile journey to Mexico.

The caterpillar sighting led me to check how monarchs have been doing in recent years. A good estimate of their numbers comes not from raw counts — it is very hard to count swarms of butterflies — but from the number of acres occupied by the migrant generation in Mexico at the peak of the winter. That’s the time of the year the butterflies are densely packed together on oyamel (fir) trees. So it’s a matter of identifying clusters of such trees, determining the perimeter of each cluster, and finally calculating the total area enclosed across all clusters. Mexican researchers, led by Eduardo Rendon Salinas, do this on an annual basis.

According to some recent references, the number of acres occupied by overwintering monarchs starting 2014-2015 (the year I visited) reads as follows:

A lot of ups and downs there with a seeming decline in the last couple of years. In contrast, the average acres monarchs occupied in the 1990s and 2000s was well over 15, and individual years frequently exceeded 20.