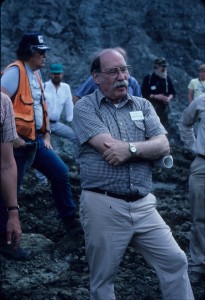 A dear friend to all, Professor Joseph H. Hartshorn, Emeritus of the University of Massachusetts-Amherst, died on May 5, 2008 in Sarasota,Florida at the age of 85.   With his passing we remember a passionate, dedicated teacher and quintessential field geologist who was a well-respected member of the Five College community. Joe retired from our department in 1987, where he served as the department head for many years and was twice the honored recipientof the Distinguished Faculty Teaching Award during his 20-year tenure. He was the real thing; a hero, mentor, friend, and someone who would always take time to show that he cared about his students, colleagues, and friends. 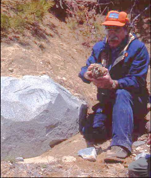 Joe was a graduate of The Milton Hershey School in Pennsylvania, and of Harvard University, where he received his PhD in Glacial Geology in 1955. At Harvard he took courses from the renowned geomorphologist Kirk Bryan, and glacial geologist Kirtley Mather, both of whom influenced large numbers of geologists of that generation who, like Joe, had a significant impact on the expanding field of Quaternary studies. Kirk Bryan was the motivating force behind Joe’s dissertation on the “Glacial Geology of the Taunton Quadrangle, Massachusetts” (1955). However, Bryan died before the thesis could be completed. Joe accordingly received considerable help from Marland Billings, John Miller, and Charles Stearns (at Tufts) (Mark Van Baalen, Harvard, pers. comm.).

While most of us knew Joe as a geologist, in his early 20’s he was, in fact, a decorated veteran of World War II, being one of a few Americans to serve in the Royal Canadian Air Force, the British Royal Air Force, and the United States Air Force.   You might be surprised to see that Joe’s picture adorns a web site highlighting a book about veterans from this era (http://www.immigrantsofwar.com/). Joe’s successful Lancaster bomber flight missions during the war earned him the distinct honor of being awarded the Distinguished Flying Cross from both the United States Air Force, and from King George VI. In fact, part of the teaching collection Joe left behind here at UMass includes vintage aerial photos of Greenland, some of which include crayon marks encircling ice contact deltas and large inactive fluvial outwash plains suitable for positioning a landing strip if needed by Allied forces.

Prior to his years at UMass, Joe worked 20 years for the United States Geological Survey. As a student of Kirk Bryan, Joe had a keen perception of landscapes and landforms and his mapping craft of morphosequences is clear on numerous surficial maps documenting Quaternary deposits throughout New England. Carl Koteff (USGS) claims that Joe is at least partially responsible for the term morphosequence, taken from the longer “morphologic sequence” to prevent confusion with similar terms in pedology.   Joe’s experience in New England was greatly enriched by fieldwork and excursions in modern glacial settings in Alaska, Greenland, Iceland, and Ellesmere Island. Today more than 22 different surficial and bedrock mapping products authored or co-authored by Joe are searchable on the USGS online database.

Joe later brought his vast experience of the modern environments, field mapping, and stratigraphy to the University of Massachusetts.   His teaching reached many, from introductory students to those with doctorates. Over the years, the department has received comments even from non-geology majors who took his introductory geology class and loved it dearly because of Joe’s amazing gift as a teacher. He touched everyone as a genuine soul with a big heart. No doubt his students still ponder some of the questions on terraces, two tills, and Dirt Machines that Joe planted as seeds in his lectures and at the outcrop. The term “flow till” that he coined in a paper in 1955 remains in the glacial geology literature today.

Friends, colleagues and former students honored Joe’s memory by holding a symposium titled “Modern Glacial Processes and the Glacial Sedimentary Record: In Honor of Joe Hartshorn” at the March 2009 meeting of the New England section of the Geological Society of America. This special session was organized by  Carl Koteff, U.S. Geological Survey; Tom Weddle (MSc 1979), Director of Applied Geology Division at the Maine Geological Survey; and Mike Retelle (PhD, 1987), Professor at Bates College. Joe never wanted a memorial service, but this professional gathering was an outstanding tribute to the man everyone loved. 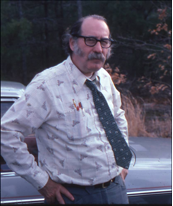 During the session, many spoke from the heart of the influence Joe had on their lives and careers. Joe mentored students professionally, taking them on field trips of the Friends of the Pleistocene or NEIGC in addition to supervising them in graduate work. But he also cared deeply about people and struggles they faced. He even let then graduate student Mike Retelle rent his house and host the first Hitchcock Beach Party when he was on sabbatical. Joe is even fondly attributed with some match making in glacial geology class that eventually led to the marriage of Tom Weddle and his wife Susan Corderman (BSc 1979) who was one of Joe’s undergraduate students. We wonder how many other couples emerged from glacial geology?

Joe is predeceased by his two wives, Eleanor Johnson Hartshorn, and Sheila Garvey Hartshorn, and is survived by his loving life partner, Patricia Cohen, formerly of Longmeadow; his children, JoAnn Morrisson, John Hartshorn, and Kerry-Beth Garvey; his grandchildren, Nathan and Elizabeth; and his great-great-grandchildren, Alliah and David. Joe and his “Dear Lady Pat” (he always refereed to her that way) explored the world together over most of the last 18 years of his life.

At the request of Joe’s family, our department is privileged to host the Joseph H. Hartshorn Memorial Fund in his honor. We hope that many of you will be willing to contribute so that his legacy may continue to enrich the academic endeavors of students within the Geosciences. Contributions can be sent to the Joseph H. Hartshorn Memorial Fund, Department of Geosciences, University of Massachusetts, Amherst, MA 01003.