The Evolution of the Solid Earth and its Minerals

Until recently it was assumed that all of the approximately 4000 known minerals had been part of Earth since its formation around 4.56 billion years ago. We now realize that as Earth evolved from a young planet with a lava surface to the green, life-rich planet of the present, new minerals developed as a result of the changing Earth environment. Earth went through four major evolutionary phases that drastically altered the surface environment. 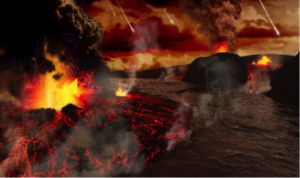 Earth is about 4.56 billion years old. It grew from planetesimals that collided to build the planet. About 200 minerals, including zircon and olivine, developed in the planetesimals that preceded Earth. Earth’s surface was a basaltic magma ocean whose main minerals were pyroxene and plagioclase feldspar. 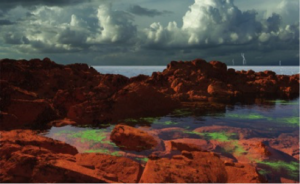 Between 4.4 and 2 billion years ago, about 1500 minerals came into existence as a result of partial melting of lavas,
and
chemical reactions and weathering by the early oceans. Minerals that developed during this time include lepidolite (a lithium mica) and beryl (whose gem form is emerald). Around 2 billion years ago Earth’s atmosphere gained oxygen and iron-rich minerals oxidized or ‘rusted’ ushering in the “Red Earth phase of Earth evolution.

Around 700 million years ago climate change caused Earth’s surface to be covered with one mineral…ice. The oceans froze. We can thank carbon dioxide that was spewed out of the the volcanoes for ending the White Earth phase of Earth history. The greenhouse effect that the carbon dioxide produced melted the ice, ushering in a time of intense weathering, adding families of clay minerals, such as kaolinite, to Earth’s mineral tally. 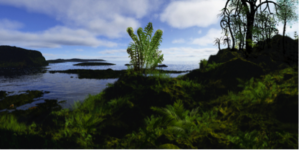 Around 400 million years ago, plants and animals became abundant, leading to the planet that we love…rich in life and beauty. Life processes of some animals leads to the production of calcite and aragonite. The full spectrum of minerals developed as a result of the interaction of the biosphere with the sold Earth and the action of weathering of rocks in an oxidizing atmosphere, but new minerals are forming even today. 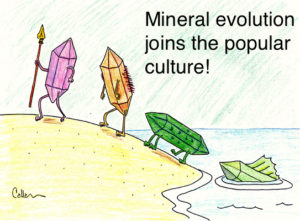 Visit the Rausch Mineral Gallery to see some superb mineral specimens located in the Department of Geosciences.