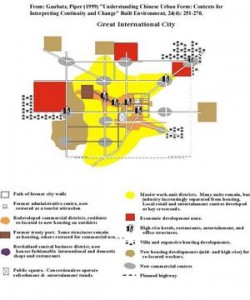 My research career began with an undergraduate thesis in Sociology on public participation in the urban planning process (Princeton, 1984) and an MA thesis in Geography on change in a North Oakland, CA neighborhood (UC Berkeley, 1986).  I then carried out dissertation fieldwork (1986-1989) on the historical and contemporary transformations of five multi-cultural cities on the Chinese frontiers, building on studies of Chinese language and society which I began at Princeton University in 1980.  Subsequently, I established two new and quite different research trajectories: one focused on contemporary transformations of large cities in eastern China, and the other on urban transformations in Japan and the U.S.  In recent years I’ve expanded my research repertoire with studies of environmental history, urban ecology and urban-rural interactions in northern China and research on processes of globalization and regional inequality in contemporary urban development in western China. My current research is centered on  understanding the transformations of public space in Chinese cities – particularly the large open squares, modelled on Tian’anmen Square, established in many Chinese cities after 1949.

These themes lend themselves well to the interdisciplinary approaches to research and analysis which I have been developing along with geographers, urban and regional planners, architects, sociologists, political scientists, anthropologists and historians.