by folbre on May 27, 2020 in covid19 pandemic, measurement and valuation of unpaid care work • 0 Comments 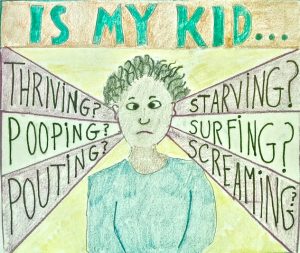 If there was ever a time we urgently needed to know more about time use, that time has come. The Covid-19 pandemic utterly changed daily rhythms for many sequestered households and the “opening up” process closed down some old routines.

I’ve done extensive work with time use data, have been in touch with several people/groups trying to measure the impact of the pandemic, and am trying to follow results being reported in other research.

My reactions are conditioned by long-standing concerns about survey methodology.

It is surprisingly hard to get an accurate picture of how people use time, because we all tend to do more than one thing at once. Also, doing is not the whole story—being present, available, on-call, and taking responsibility for others is typically far more time-consuming than specific acts of helping. This is especially true for the care of young children, people who are sick, frail, or suffering a disability.

Sheltering-in-place guidelines, combined with the social distancing, have probably had a much bigger impact on where people are, who they are with, and what they are responsible for—than on their activities.

Yet most surveys focus on activities alone, in several variations. They ask stylized questions about how much time people spent in various activities in a given time period, such as the previous day. Or, they persuade respondents to fill out a time diary in which they report what they did in specific intervals (such as every ten minutes) between waking up in the morning and going to sleep at night.

Note the prominence of the words “activities” and “doing” in both cases. Some surveys reach a bit further. The annual American Time Use Survey (ATUS), for instance, asks people if a child under the age of 13 was “in their care” while they engaged in activities. While the ATUS describes such care as a “secondary activity,” it is better interpreted as a responsibility that strongly influences the way that people organize their activities and plan their schedules.

Being on-call to provide care also creates vulnerability to brief but sometimes incessant interruptions whose impact is probably difficult to measure.

This is important because sheltering in place and sequestration almost certainly increased supervisory demands as much (if not more than) active care of young children. At the same time, social distancing guidelines limited peoples’ ability to provide any supervisory care or assistance to elderly or hospitalized family members.

Furthermore, these constraints are likely to be in place for some time—over the summer, children’s activities outside the home are likely to be restricted. Next fall, school schedules may be modified to reduce social density, by having some students come earlier or later in the day or spend some days at home learning on-line. Who will be on-call to supervise them?

From this perspective, consider some of the fascinating findings from on online survey of U.S. parents in mid-April reported in a recent briefing paper published by the Council on Contemporary Families (CCF). This survey was not based on a random sample (which would be hard to accomplish in a short time frame) and relied on stylized questions regarding time spent in specific activities.

The good news is that surveyed that mothers and fathers agree that fathers began doing more housework and childcare after the onset of the pandemic. This does not surprise me too much, since more men were at home, whether as a result of furlough, unemployment, or ability to telecommute. Like the authors of the paper, I’m hopeful that the experience of spending more time in proximity to kids will increase paternal engagement in the future.

The more striking finding, it seems to me, is that the pandemic did not increase time in domestic labor because some tasks like transporting children, attending children’s events, organizing children’s schedules/activities, and grocery shopping became less frequent.

This implies that time devoted to childcare activities declined even as on-call responsibilities increased.

We need to know more about how parents experienced the intensification of such responsibilities. The CCF report is optimistic that the increased opportunities to perform paid work from home will promote a more egalitarian gender division of labor. I’m not so sure that paid work at home is viable for parents of young children without some delegation of supervisory responsibilities.

The CCF report devotes substantial attention to differences in mothers’ and fathers’ tallies of the way in which domestic responsibilities are allocated, an issue also highlighted by a recent surveys conducted by the New York Times and USA Today. These discrepancies highlight the greatest shortcoming of surveys based on stylized questions—women and men probably interpret questions differently, and reporting of relative participation (as in, who does more than whom) is particularly susceptible to social desirability bias.

Diary-based surveys—even if greatly abbreviated and simplified– would almost certainly yield more accurate results, especially if they included explicit attention to on-call responsibilities. Yet some additional stylized questions—especially about perceptions of supervisory constraints and the experience of doing paid work at home with young children present—would also be super helpful.

* I wish the ATUS also asked how much time sick or frail family members were “in your care” but it does not; nor is it clear how accurate responses to this question regarding children under the age of 13 are.