by folbre on May 19, 2020 in covid19 pandemic, measurement and valuation of unpaid care work • 0 Comments 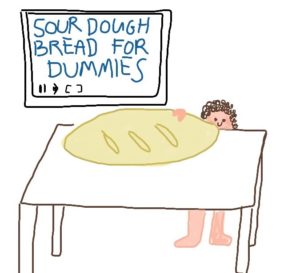 “Shelter in place” mandates in the early stages of the U.S. Covid-19 pandemic required many people to stay home, cook their own meals, school their own children, and entertain themselves.  Unpaid work served not only as a social safety net, but also as an automatic stabilizer. While it didn’t dampen fluctuations in official Gross Domestic Product, as did unemployment insurance, it clearly helped stabilize consumption.

Just imagine what would have happened if most people had not had refrigerators, stoves, and computers—or just read reports of the plight of homeless people.

By mid-March 2020, many states and localities shut down restaurants for any services other than take-out. Home-produced meals increased of necessity. Many such meals probably consisted of convenient processed foods that could be popped into a microwave oven, but a renaissance of home cooking also became apparent, along with reliance on long-lasting, easily stored items such as rice and beans.  Analysis of Google Search terms showed a sharp spike in questions concerning food preparation and storage. As one newspaper put it, America began baking its heart out. Yeast suddenly became as hard to come by as toilet paper.

In 2018, according to the American Time Use Survey, adult civilian women spent an average of .8 hours a day, and their male counterparts .4 hours a day in meal preparation. How much more did they spend in the months of March and April, and what was the monetary value of this unpaid labor, based on what it would have cost them to hire someone to plan, cook, and clean up? How much did they save on eating-out?

Many childcare centers and schools were closed, leaving parents with responsibility for home-schooling, supervising children, and keeping them from going confinement-crazy.  The American Time Use Survey averaged the amount of reported time that married mothers and fathers living with children under the age of 18 spent in primary activities of caring for and helping household children  over the 2013-2017 period—an average of 2.6 hours per day for mothers not employed and 1.4 hours for fathers not employed.

Under sequestration, both active care and supervisory care (defined as the time in which an adult reported that a child under the age of 13 “in their care” ) ballooned. How much did these two forms of childcare increase? How much did households save on childcare costs?

Video streaming and gaming increased dramatically, especially during afternoon hours, and people began to rely more heavily on streaming for instruction and exercise as well as entertainment. So, while they spent less money (and less travel time) on entertainment away from home, they substituted forms of entertainment that were probably less expensive, on average. How much less expensive?

Between March and May, average household income plummeted as a result of job furloughs and unemployment. The increase in time devoted to household production buffered this loss to some extent—but without answers to the questions above, we can’t know how much. Most recent impromptu household surveys have focused primarily on women’s unpaid work relative to men’s—an important, but different topic.

For years, I have protested economists’ lack of interest in total consumption—defined as the sum of money expenditures and the consumption of home-produced services.

Let me will repeat one example that I have written about in more detail elsewhere: Compare two couples, each with two small children, each earning $50,000 after taxes. Conventional measures treat them as having exactly the same income. Yet one couple may include an adult earning $50,000 and a full-time homemaker/caregiver, while the other includes two adults earning $25,000 each and obviously has less time to devote to unpaid work. If we assigned any positive value to unpaid work, the first household would obviously be better off in terms of both income and consumption.

Market income is just not a very good indicator of total consumption among households with differing inputs of unpaid work. Also, the value of unpaid work is greater in households with more than one person, because of economies of scale in food preparation and childcare. Standard equivalence scales used to adjust household income for household size and composition completely ignore these issues.

Obviously, the additional unpaid work performed while sheltering in place was a source of great stress, especially for those simultaneously telecommuting, zooming, or otherwise trying to fulfill paid employment responsibilities at home. Yet, it’s hard to deny that this work also “added value,” enabling an important form of social provisioning.

The worst-case scenario for a household with children was almost certainly one in which all adults (e.g. mother and father) were essential workers, required to keep working (often at risk to their health) but unable to work from home. Federal and state agencies tried to provide “resources” for these workers, but no guarantees were forthcoming.

In many cases, one of the adults (probably the mother) was forced to quit or take a leave of absence from paid employment. While new federal legislation gives states flexibility to pay benefits where an individual leaves employment to care for a family member, not all states do so.

Such a policy is effectively a paid family leave—something that most states have shied away from for years, making this country an international outlier. The complexity of the new legislation, plus the difficulty of actually filing for and receiving unemployment benefits, has probably kept take-up pretty low even in states that allow this option.

Just one more reason to consider policies such as federal paid family and sick leaves and a universal basic income that could help the stabilizers known as households do their job.