Are We All Care Workers Now? 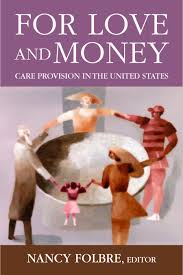 Who, exactly, are care workers, other than  the people we need most right now, as the covid-19 pandemic overlays the division of labor with a new division of risk?

I’ve long been an advocate of using the term “care worker” rather than “caregiver” even though the work can be and often is, at least in part, a gift. Because care–whether performed for pay, or not–is at the crux of any sustainable economic system. All work depends on the successful production and maintenance of workers themselves. Yet because this very notion of care-as-work is relatively new, there is little agreement on its exact boundaries.

When I first started pursuing this issue with Paula England, we emphasized hands-on or face-to-face work that develops the capabilities of the care recipient, an essential aspect of the services that  health care providers, workers, child care and elder care workers provide.  This emphasis could be translated into a specific list of Census-designated occupations, grounding empirical research on the relative pay of care workers that  has revealed  significant pay penalties for both women and men in such occupations, controlling for many other variables such as education, experience, and unionization.

I liked this broad definition because  it spanned  paid and unpaid work,  low-wage and relatively high-wage occupations,  women and men, creating potential for new political alliances. Sociologists initially embraced the definition with some enthusiasm. Not so, economists, and Robert Solow, who attended some meetings of the  Russell Sage Foundation Network on Care Work, pushed us for more specificity.

I felt some affinity with Kenneth Arrow’s insistence on the limits of markets and with efficiency-wage theories  pointing to the difficulty of monitoring worker productivity, so added another twist to the definition: work in which concern for the welfare of the care recipient is likely to affect the quality of the service provided. In other words, work not performed entirely for money, akin to what some economists have termed “public service motivation” but more…personal.

Still not quite right. Sociologist Mignon Duffy has argued eloquently in Making Care Count that this definition privileges what she calls “nurturant care,” deflecting attention from the drudgery of menial care tasks–the emptying of bed pans, cleaning of toilets, and mopping of floors often performed by the most disempowered members of society. “Dirty” work itself is devalued.  Duffy’s work has nudged me to focus more on industry–the economic consequences, for instance, of being employed in health care, education, or social services, regardless of occupation.

The pandemic, however, has pushed me over a cliff, because it is redefining the meaning of “dirty” work–now, any work that increases the risk of exposure to a potentially deadly virus: not just health care, child care, and elder care and unpaid care for family members, but also food services, package delivery, police protection, home repair services,  garbage collection…the list goes on. We rely heavily on the motivations of such workers to minimize our own–as well as their own–chances of infection.

The entire sequestration/shelter-in-place/social distancing strategy relies heavily on good will and voluntary compliance.  The very invisibility of covid-19 blurs the boundaries between love and money, us and them. The healthy now may later be sick, the sick now may later be dead.  When risk is shared, the overlaps between solidarity and self-interest expand.

Yet so many boundaries, however blurry, remain in place. Whether because of who they are or what they do, some workers face much greater risks than others. It’s not enough to cheer them on, to offer them applause or a bit of extra cash.

If we are all care workers now we should do everything in our power to protect our own.

← View from a Blue Rurality
The Care Theory of Value →