Not O.K., Boomers (with postscript)

by folbre on February 15, 2020 in care policy in the electoral arena • 0 Comments 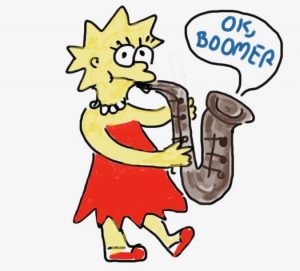 I must be a boomer, because I can never remember the difference between Generations X, Y (Millennials) and Z. Yet I am a fan of the phrase “OK, Boomer,” because it’s a relatively polite and pleasantly concise, if ironic, way for young people to explain “there’s a reason why we disagree.” And this reason is a good one: generational differences have economic and political valence.

Who thinks otherwise? Farhad Manjoo, who headlined a New York Times opinion piece “Instead of a Generational Culture War, Let’s Fight the Rich.” One can agree with the last phrase and take issue with the first. Differences do not a culture war make.

Manjoo’s wording echoes the popular, but simplistic assumption that identity politics are distinct from economic interests and inherently more divisive. He gives examples to support his case,  pointing to old people that are “on our side,” like Bernie Sanders. Yes, of course, but social divisions in the U.S. today can’t always be reduced to us versus them.

Many people find themselves in contradictory positions—advantaged in some respects, disadvantaged in others. Being a boomer is not a cultural construction. It is a demographic reality with significant consequences. People now covered by Medicare have less to gain than others do from Medicare for All.  Younger people will almost certainly suffer greater ill effects from climate change than people likely to die within the next fifteen years.

Elderly complexions are very different from those of younger groups. The most common age among whites in U.S. is 58 – more than double that among racial and ethnic minorities. The elderly are also the greatest beneficiaries of welfare state transfers: On a per capita basis, net  public transfers to those over 65 far exceed those to the under-18.

Elderly voters have more conservative views than others, and they make their views count. In the 2016 presidential election, about 71% of those over age 65 voted, compared to about 46% in the 18-29 year old age group. Those under 18, it’s worth remembering, can’t vote.

Generational differences don’t override other collective economic interests, but they do intersect and overlap with them, sometimes in conflicting ways. Because such conflicts complicate the formation of progressive coalitions, they require dialogue and debate.

So, more “OK, Boomer” exchanges would be a good thing, especially if they  became genuine exchanges of ideas and concerns. It wouldn’t hurt to include a few “Not OK, Boomers” in the mix.

Here’s why Lisa Simpson is the visual icon for this post. She was born in 1987 as a perennial 8-year-old. If she were a real person, her actual birth year would be 1979, which puts her in Generation X. She may be my favorite member of that generation, which goes to show you that in most respects I remain a die-hard Boomer.

Coronavirus quickly put a new spin on this issue–as in irreverent comments like “Coronavirus as BoomerRemover.” Some youngsters did post  videos of themselves licking ice cream containers in supermarkets and then replacing them in the freezer, or, in one instance, licking an airplane toilet seat–isolated examples of stupid currencies of notoriety on the internet. Even the more widespread behavior of partying at the beach in large and close-together numbers probably did less harm that the mixed signals given by “mature” political leadership.

Still, the intergenerational tensions are real: the risk of mortality from Covid19 goes up with age, just as the risk of being seriously affected by global climate change goes down.  Serious attention to intergenerational negotiation could do us all more good than either acting out or finger-wagging.