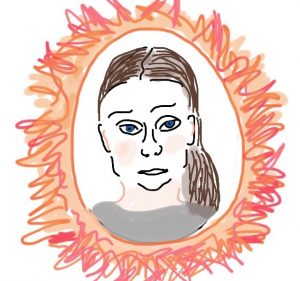 After  her first speech to the Davos Forum of world “leaders” in Switzerland last year, Greta Thunberg was cautioned against causing panic. In her recent encore performance of January 21, 2020 she drily observed that she was clearly not causing panic, because they had done absolutely nothing over the past year  to halt global climate change.

Anyone who doubts that Thunberg’s insistence on immediate action is unfounded should read Paul Krugman’s recent New York Times column, which compares  her understanding of economics quite favorably with that of U.S. Treasury Secretary Steven Mnuchin. I’d go further:  she is way ahead of most of the economics profession. She boils the issue down to parental commitment: “we are telling you to act as if you loved your children above all else.”

Quite a contrast with the traditional textbook approach to discounting the future, based on a 1928 paper by Frank Ramsey positing an “infinitely lived agent” who optimizes his own consumption over time, or  with the “dynastic utility function” invoked by Gary Becker and Robert Barro, which simply takes altruism toward  biological descendants as a given.

Thunberg’s metaphor is very much in synch with the 2006 Stern Review on the Economics of Climate Change, which argues that we should weigh the well-being of future generations as heavily as our own. This argument has taken a lot of heat from economists. Cameron Hepburn and Wilfred Beckerman effectively outline the ethical issues deeply embedded in assumptions regarding discount rates here. And, yes, these issues are complicated and deserve serious discussion beyond the blogosphere.

But Greta Thunberg is highlighting a point that most economists have missed: climate change is happening so rapidly that it is threatening the economic prospects of children already born, children who lack the political or economic power to fully  represent their own interests, but are fully capable of anger, outrage, and protest at the complacency of the older generation.

If you’re having a hard time imagining the possible consequences, give John Lanchester’s dystopian novel The Wall a read. It’s not the best of Lanchester’s work, but it includes an unforgettable description of young people so angry at the state of the world that they refuse to even speak to, much less care for, their parents.

3 comments for “Greta on Fire”