A UBI for Care? 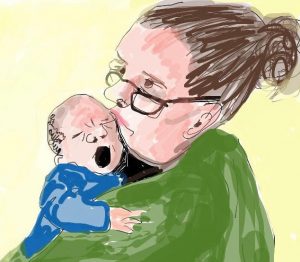 Thanks, Nancy, for inviting me to share my proposal for a UBI that supports women, children, and care work in general. As we weigh the pros and cons of a UBI, it’s important to be specific about the goals and details of any particular proposal, since the basic definition of a UBI–a broadly distributed regular cash payment to individuals that is unconditional on work or behavioral requirements–leaves a lot out.

As Nancy indicates, Andrew Yang’s UBI proposal is aimed at addressing job loss through automation, and for that purpose he limits the UBI to adults only. He’s not structuring the UBI to address inequality, so his funding scheme is not redistributive. Instead, it’s based on implementing a new value added tax (VAT), the kind of broad-based consumption tax common in European countries–countries that also have broad-based social welfare benefits, including universal healthcare, free or low-cost education, universal pension programs, and so on.

If we want instead to design a UBI to help support care work, the UBI has to go children as well as adults. I’d also want the UBI to reduce if not eliminate poverty–a disgrace in a country as rich as ours. And I’d want it to reduce inequality, a growing problem in the US. To achieve these goals I propose a $500 a month UBI for all–men, women, and children–and I’d finance the UBI through progressive taxes on the wealthy–ideally a dedicated wealth tax, but income taxes could work too, as long as they were truly progressive.

Nancy raises the question of the surfer and the single mom getting the same level of support, but if the UBI goes to children as well as adults they don’t get the same support: surfers, if they have no children, get only $500 per month, while the single mom gets $500 per month for herself and $500 a month for each of her children (until they reach maturity and claim it on their own). And because UBI is an individual and additive benefit, they keep their full UBI even if another adult moves into their household, or they move in with friends or family. Most importantly, if the UBI is financed by progressive taxes on the wealthy, single moms at the lower end of the income ladder keep their UBIs even when they work, full or part-time, until they move well into economic insecurity.

Let’s compare this UBI not to some unspecified ideal policy in which benefits would be perfectly targeted to the needs of caregivers while excluding surfers, but to the feasible alternatives, which as far as I can see are:

The status quo: no UBI, just the means-tested, conditional “welfare” programs we have now, which fail to support families, because 1. they are almost all conditional on working or looking for work, meaning that single moms can’t continue to receive benefits if they decide that it makes more financial sense to stay home with their children, or if they want to work, but cannot find jobs they can combine with their care responsibilities; 2. they are household-based, rather than individual benefits, meaning that a single mom who gets married or moves in with her parents, even temporarily, loses her benefits if the total income and assets of the household rise above low income and asset caps; 3. the eligibility requirements of the different programs are variable, confusing, and stigmatizing enough that many welfare programs have very low take-up even among those who are eligible.

A new program supporting caregivers specifically: I understand the motivation here, but I’m concerned that a caregiver benefit would further the disparities in care work between caregivers and market workers. At a time when most women combine unpaid care work and market work and men are increasing their participation in family care, we should look to programs that support care work by all, rather than suggesting that those who don’t receive the caregiver benefit are off the hook. Most importantly, we all, even surfers, need resources to care for ourselves. In a rich country, should we all have to work to access to even the basic necessities of life?

A full-employment/guaranteed jobs program with paid caregiving available to all: I’m skeptical that this is a feasible alternative in the US, as the model is declining even in the small Scandinavian states that pioneered it. But even there, the wealthy are able to exempt themselves from norms of full employment effectively imposed on those lower down the economic ladder, so it does not meaningfully address inequality unless work requirements are universal. And, as philosopher Nancy Fraser* has argued, this model suggests that care work is something no one should want to do, and that should only be done for pay. Is that the message we want to send about care?

What I like most about UBI is the pluralistic impulse that underlies it–that individuals are the best judge of how to use their time and resources to find the combination of care, market work, and leisure that make sense for them. This requires that we all have some resources to begin with, and that we focus our free-riding concerns where they really matter. Surfers who live off only the UBI should concern us less than the systemic free-riding of the market sector on unpaid care work. A progressively financed UBI is the best way to redress that wrong.

← Basic Incomes for Whom?
Greta on Fire →