Basic Incomes for Whom? 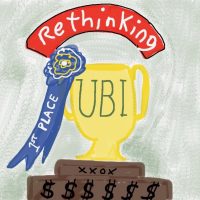 Whatever you think about Andy Yang, you gotta love his slogan: Make America Think Again, acronymized as MATH.  Yang has helped publicize the concept of a universal basic income, or UBI, and that concept itself is encouraging America to think  harder about social policy.

The merits of any UBI depend greatly on the specifics, and I have long worried about lack of attention to its implications for unpaid caregivers.  It seems crazy to me to suggest that UBI, in and of itself, would effectively encourage family care (as suggested to me recently  by a Wall Street Journal reporter). If every adult gets the same stipend, a surfer in San Diego gets the same level of public support as a single mom in Ohio.

Yang’s specific proposal, motivated in large part by warnings of robot apocalypse and job loss, would send $1000 a month to all citizens of the U.S. over 18, would be financed in part by cutting support for in-kind social programs, and in part by  a mix of progressive and regressive taxes that is so vague that its distributional impact cannot be ascertained.

I don’t like it. What I dislike most is that it ignores kids. One person who has thought hard about this problem is  Almaz Zelleke, who presented some of her ideas in a session entitled “Cash Transfers, Women, and Families: International Perspectives,” at the Allied Social Science Association (ASSA) in San Diego,  co-sponsored by the Association for the Study of Generosity in Economics (ASGE) and the International Association for Feminist Economics (IAFFE).

Almaz got me thinking on this, and I’ve invited her to summarize her proposal in another post. I’m also hoping to keep this thread going with a follow-up post summarizing proposals that have recently been introduced in the U.S. Congress. Meanwhile, some points I made as a discussant in the session:

Once upon a time, UBI was dismissed as a program that would simply reward laziness, undermine incentives to work, and reduce “labor supply.” In other words, its good intentions would backfire, with consequences similar to increases in the minimum wage, once widely assumed to cause significant unemployment.

These days are over, and convergence with the minimum wage debate is apparent: empirical research has called theoretical priors into question.  Impossible to summarize here all the basic income experiments conducted in recent years  (and still ongoing), but here’s a link to nice summary of research in developing countries entitled “Debunking the Stereotype of the Lazy Welfare Recipient.”

I’ve been especially impressed by a detailed study of evidence from an analysis of the effect of universal and permanent cash transfers made since 1982 by the Alaska Permanent Fund (generated by oil revenues) to all state residents, amounting to about $2,000 per year, per person, including children. In other words, families of four in that state could receive about $8,000. The authors find negligible employment effects, emphasizing the positive effects of increased buying power on the level of economic activity.

A notable feature of the Alaska policy is its inclusion of children, an issue that goes remarkably unnoticed in some economic research. For instance, an otherwise excellent National Bureau of Economic Research paper that situates analysis of a basic income program in the larger “U.S. program ecosystem” deplores its potentially negative distributional impact: “a greater share of transfers to childless, non-elderly, non-disabled households, and more to middle income than to poor households.” This conclusion follows almost inevitably from the assumption that the transfers would go only to adults.

So—more effort, please, to bringing  parents, children, the sick and elderly fully into the picture. One implication for economists, in particular, is that “labor supply” (which I generally put in quotes, because I think the term is so misused ) should not be defined simply as paid labor supply:  the supply of unpaid care is also important.  For instance, another paper presented at the ASSA session, by Tanima Ahmed of American University, offered evidence that South African child grants increased the time that single mothers devoted to family care more than it decreased their paid work time.

Another, related issue, concerns the definition of “family income.” Conventional measures look only at market income, ignoring the value of non-market work, which generally goes down as hours of market work increase.

Maybe this is why I am so fascinated by UBI —because it upends  many of the cherished assumptions of mainstream economics.