by folbre on December 13, 2019 in gender inequality and care, the meaning of care and the care sector • 0 Comments 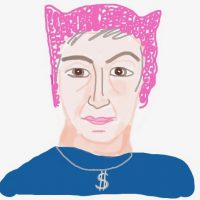 How colors mysteriously attain political significance. Pinko has a kind of vintage glow. Time magazine used it in 1925 as a snappy way of altering the term “pink,” long used to imply that leftist tendencies were effeminate, as in “parlor pinks,” a term the Wall Street Journal included in a list of derogatory adjectives applied to progressive politicians:  “visionaries, ne’er do wells, and reds.” Joe McCarthy loved the pinko word,  and Richard Nixon exploited the gendered implications in his 1950 Senate campaign against Helen Douglas, who was, he explained “pink right down to her underwear.” Governor George Wallace of Alabama campaigned against “the left-wing pinko press” and (my personal favorite), “pseudo-pinko intellectuals.”

I first began studying economics at the University of Texas in Austin, where a group of so-called institutionalists had long argued capitalist institutions were in need of careful regulation. During the McCarthy era, the Texas legislature called Professor Bob Montgomery in for political interrogation. Legend has it he appeared in a tailor-made pink suit. This seems improbable, but I wouldn’t be surprised if he wore a pink tie. Asked by a belligerent inquisitor if he believed in private property, the Professor replied, “Senator, I believe in it so strongly that I think everyone in the state of Texas should have some.” Pinkos rock.

We have taken grief from left as well as right. When British Labour Party leaders leaned centrist, they were often accused of diluting its red principles. As a little ditty from the 1950s put it, “the people’s flag is palest pink, mum washed it in the kitchen sink.” According to Wikipedia, the same phrase came up again in the 1960s. Is the allusion to “mum and the kitchen sink” incidental? I don’t think so. Red for blood, and the red-blooded; pink for little girls, women’s underwear, and dishtowels. I have often heard veterans of the left refer to issues gender and sexuality as a diversion from economic issues, relegated to the subjective anxieties of personal identity. For the most part, however, the younger generation, gets it: gender, sexuality, age, race, ethnicity, citizenship, class and many other dimensions of collective identity have consequences that are shaped by hierarchical institutions. The only way to fundamentally change these institutions is to form alliances among groups whose long-term goals can supersede short-term conflicts of interest.

To form alliances is to form teams, and teams need their colors. I own two pieces of hot pink clothing. One is a cotton zip hoodie that says UMass. The other is a Planned Parenthood t-shirt that says Never Stop Caring. I had another one that said Feminism is My Second Favorite F-Word but I gave it to my sister to cheer her through some shoulder surgery. Then I saw a blue t-shirt saying Football is My Second Favorite F-Word, which made me wonder which came first, and why it is so difficult to understand the world. Anyway, I’m imagining a nice, tailored pants suit that I could wear to a legislative hearing. Not a pale pink, but a fuchsia, the intense purplish pink, now my third-favorite F-word.

Globally, most center-right parties are labeled blue, but in the U.S. today, Republicans are red, and Democrats are blue. Why?  Because the major television networks decided around 2000 to standardize their visuals that way on election night. Maybe they wanted to disassociate the Democrats from any red tradition, though it could have been clueless happenstance. That corporate media rather than the major parties themselves chose the colors seems quite telling. Merriam-Webster defines “pinko” as a person who holds advanced liberal or moderately radical political or economic views. Libs and rads should proudly wear the pink and defy those who call them sissies. Some words born as insults yield unintended insights.

← Quantifying Care
What IS the Economy, Stupid →