by folbre on June 19, 2019 in measurement and valuation of unpaid care work • 0 Comments 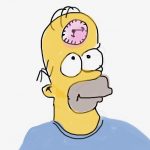 The lazy father is enshrined in popular culture. Google up the term and there he is: Homer Simpson snoring on the couch. Unfair caricature, especially on Fathers’ Day!

So, it’s easy to see why a short  essay by Robert VerBruggen in defense of fathers caroomed through social media this week, boosted by a link from  Ross Douthat’s regular New York Times opinion column.

But is laziness really the issue? Serious complaints about the gender division of labor seldom boil down to finger-wagging accusations of moral turpitude. They point instead to economic inequalities between moms and dads that result from social institutions–public policies, employer practices, and cultural norms.

Mr. Verbruggen is skeptical of such inequalities, suggesting that those who emphasize them are…well, lazy. They have ignored the facts revealed by the American Time Use Survey.

He begins with a reproachful observation: “Among married couples living together with kids, if anything, it’s dads who do more work in total—adding up paid work, housework, child care, and even shopping.”

Mothers will not be surprised to learn that the validity of this claim depends on how “work” is defined.

Before delving into the American Time Use Survey, however, consider Mr. VerBruggen’s casual emphasis on “dads in married couples living together with kids.” A lot of dads don’t fit this description—in 2018, according to the Current Population Survey,  only about 39.6 million fathers co-resided with children of any age, compared to about  52 million mothers.

The latest report from the Census Bureau notes that less than 44% of custodial parents with child support orders received the full amount they were legally due. This is not a laziness problem; it’s an enforcement problem.

Married fathers living with their children do spend more money and more time on them than other fathers do. One can hope that at least some of them were served breakfast in bed on Fathers’ Day.

Mr. VerBruggen, however, overstates his case. While he notes that measurement of time in specific activities doesn’t fully capture the demands of household management, he makes no mention of supervisory care. In the U.S., leaving a child under the age of 13 alone is widely considered a form of neglect.

Young children require supervision even when they are playing in the house or backyard. Nannies and babysitters get paid to be on call even when children are asleep. Most national time-use surveys do not collect information on the “passive care” that parents provide.

However, the American Time use Survey, has, from the very outset, asked respondents if children under the age of 13 were “in their care” while they were doing other things. This responsibility falls more heavily on mothers than on fathers.  A recent analysis of this data on “secondary” time use  for the years 2013-2017 found that women spent about 90 minutes more per day than men did in this way—keeping an eye on children while engaged in personal care, eating and drinking, or leisure activities.

These numbers are not exactly comparable with those that Mr. Verbruggen cites (they are not limited to parents in married couples) but if taken into consideration, they would significantly alter the findings he reports. They are reinforced by studies from other countries, such as Australia, showing that childcare responsibilities alter the quality and timing of women’s leisure as well as their opportunities for paid employment.

Several other measurement issues are relevant to Mr. Verbruggen’s comparisons. Reports of time in paid employment tend to be inflated by a tendency to include all hours that are paid for on the job—even if they include coffee breaks, socializing, or surfing the web. This tendency nudges estimates of men’s total work time upward.

By contrast, the definition of unpaid work tends to be more subjective and more variable. For instance, the list of work activities in the research Mr. Verbruggen cites does not appear to include care of household or non-household adults, including those who are elderly or infirm. Nor does it include the category of organizational, civic and religious activities that encompasses volunteer work.

The very nomenclature of the American Time Use Survey tabulations testifies to an inertial loyalty to conventional terminology. Only the category pertaining to paid work is plainly labeled “work.” With the exception of the time-honored subcategory “housework,” unpaid work is referred to as “care,” “helping,” “services” or simply “activities.”

This nomenclature reflects a social norm that treats care provision as an activity that is not really work, because, well, virtue is its own reward. Mr. Verbruggen veers in this direction when he emphasizes that many mothers simply prefer to specialize in family care. He fails to note that such preferences have changed considerably over time and are likely to keep changing.

More importantly, he fails to note that such preferences are both costly and risky in an institutional environment that makes it easy for men to opt out of care responsibilities simply because they prefer to do so. Because the risk of divorce remains high, even married mothers are more likely to suffer poverty than their partners, and current Social Security policies leave women with a low or uneven earnings record with very low retirement benefits. Unlike many European countries, the U.S. does not currently offer any ‘care credits’ for time taken out of paid employment.

Many important details on the evolution of international policies can be found in UNWomen’s latest Progress of the World’s Women Report 2019-2020: Families in a Changing World, due out on June 25th.

Dads as well as moms would benefit from a number of public policies designed to  make it easier to balance family work with paid work.

← Cut Child Poverty by Half
Revaluation not Devaluation →