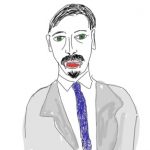 Because many countries don’t allow the purchase of human blood for plasma extraction, U.S. businesses find a ready market: According to The Economist,  plasma accounts for 1.6% of the value of U.S. exports. A recent New York Times article explores what life is like for the “plassers” who routinely sell their plasma on the cheap, often in order to pay their bills.

Advocates for the trade argue that many types of people “donate” but research by Heather Olsen and others at Case Western Reserve University shows that collection centers tend to be concentrated in poor neighborhoods. Their presentation slides, including maps, are compelling.

In eighteenth-century France, Voltaire described men of business who “sucked the blood of people in broad daylight” living “not in cemeteries, but in very agreeable palaces.”  Karl Marx introduced the metaphor into political economy when he described capital as “dead labor which, vampire-like, lives only by sucking living labor, and lives the more, the more labor it sucks.”

In the old days, it was believed that sunshine and garlic could keep vampires at bay.

← How I Learned to Love Macro
Love Among the Synths →