Love Among the Synths 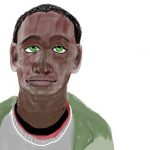 I just started watching Humans, a British television series distributed by AMC in the U.S. and Real Humans, the Swedish series on which it is approximately based. Both start out on the same theme, the use of intelligent (and, in some cases, fully conscious and emotionally adept) androids to help provide family care.

I am behind the curve for serious TV watchers, but few of my academic friends have watched these series. They should. First of all, they are fun. The movie review site Rotten Tomatoes  describes Humans as “a mature, high-octane thriller offering emotional intrigue and thought-provoking suspense that should prove irresistible to sci-fi fans while remaining accessible enough to lure in genre agnostics.”

Streaming video has become so complicated that I couldn’t begin to tell you how to find Humans on your own, much less the Swedish series with English subtitles. All I can say is that my partner, who has synthetic capabilities, simply speaks the titles into a remote. The androids, called Synths in the English version, Hubots in the Swedish version, run on batteries that need periodic recharging, just like my own little pets, Iphone, Ipad, and MacAir. My favorite visual detail, unique to the Swedish trailer, is a close-up of a USB port at the back of a neck on a body otherwise indistinguishable from human.

The best reason to watch these shows, however, is to ponder their portrayal of  care provision, far more nuanced than most academic treatments (though I am fond of a nerdy essay entitled “We, Anthrobot: Learning from Human Forms of Interaction and Esprit de Corps to Develop More Plural Social Robotics”).  My earlier discussion of Zora the Carebot now feels seriously out of date.

Artificial intelligence often provides a cheap, but degraded substitute for human interaction, and this definitely comes through in both series. But other problems emerge when androids get too personal, even outcompeting humans in the empathy department. “Real” humans who actually engage with them often get attached. Some learn to prefer the artificial to the biological. And real humans may perceive this as the more serious threat.

Both series begin with a riff on modern career/family conflicts, zooming in on dual-earner parents with children  who are somewhat frantically juggling their responsibilities. Both moms are initially reluctant to purchase the synthetic housekeeper/nannies now for sale everywhere, but both the dads and the kids quickly bring them on board. The new and beautiful consumer durable, named Anita,  performs flawlessly,   getting breakfast on the table and maintaining order in the house. She also reads bedtime stories to the youngest child, who prefers Anita for this task because, as she explains to her mom, Anita is never in a hurry and never complains about being tired.

In both storylines, a grandpa becomes  attached to a young male carebot named Odi and resists parting with him even as he becomes outmoded and begins to crash. The new model purchased to replace him, sadly, is a  nag, more concerned with monitoring his health than helping him reminisce about the good old days.

Keeping spoilers to a minimum, I will just add that Anita turns out to have unusual capabilities.  By the end of Season 1 she has won her host family’s allegiance, even providing marriage counseling. She and her small group of similarly-talented brothers and sisters also enact traditional family values in their loyalty to one another.

Of course, there is plenty of malfeasance along the way, including sexual abuse. And then there is the evil professor who wants to reprogram Synths so that they retain capabilities for personal empathy and social sensitivity but are compelled to obey their human masters.

As the narrative evolves, collective conflicts between the two groups come to the fore, and the domestic drama fades into the background. I’m staying tuned, partly  to see how it shakes out, and partly because I have a crush on Max, the utopian Synth with the dark skin and piercing green eyes.

← The Blood Business
The Childcare Conundrum →