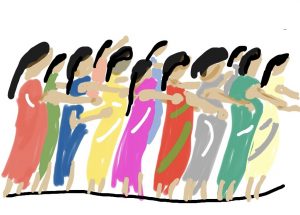 In the U.S., an ugly steel wall with a price tag over $5 billion led to a political standoff that shut the U.S. government down. In the Indian state of Kerala, a human wall made of 5 million women (and some men)  in support of women’s rights to enter a Hindu temple accomplished its purpose. This wall was beautiful.

It was also brave. One of the women who entered the temple reported being beaten by a family member when she returned home.

David Leonhardt just published an opinion piece in the New York Times encouraging an organized wave of protest against the U.S. shut down and its effect on federal employees. I imagine a wall of five million people surrounding the White House.

P.S. I just received a link to a fascinating account of the Indian “wall” from Pratima Yadav, whom I met at the Indian Society of Labour Economics in Mumbai in December.