by folbre on December 11, 2018 in measurement and valuation of unpaid care work, the meaning of care and the care sector, work-family policies • 1 Comment 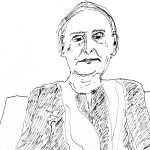 I am gearing up to attend the annual meetings of the Indian Society of Labour Economics in Mumbai, with support from the Canadian International Development Research Centre. This seems especially important to me because several South Asian scholars are doing important research on the mis-measurement of women’s work, including Indira Hirway  (sketch here, from the Mexico City Gender Statistics Conference), Jayati Ghosh (who visited UMass in November), and Ashwini Deshpande and Haris Gazdar (who I connected with at the International Association for Feminist Economics Conference in New Paltz, N.Y. last June).

The event has also prompted me to think more seriously about whether the discourse on care work that has emerged in affluent countries like the U.S. is relevant to countries like India. As you might guess from previous posts, I’m confident that it is, but not without some serious revision. For instance, research by my student Leila Gautham on the Indian case  reveals a motherhood penalty for women’s earnings in cross-sectional data, but none in longitudinal data that allows for fixed effects. She hypothesizes that, because most women in India become mothers at a relatively early age, the motherhood penalty is essentially cooked into the gender wage differential, and can’t be separated out in the same way that it can in the U.S., where about 15% of women remain childless, and age at first marriage is relatively high.

Also, discussions with Leila about the relationship between non-market work and the informal sector that looms so large in developing countries suggests to me that occupational segregation in care occupations and industries may be less important in developing countries than women’s overrepresentation in the least remunerative parts of the informal sector.

The policy take-away in both developing and developing countries, however, remains similar: more investment in “care infrastructure,” both physical and social, could reduce gender inequality and increase overall productivity.

My lecture will be a summary of recent research on the conceptualization of unpaid and paid care work, the economic penalties imposed upon them, and some important policy-oriented community-level studies of the effects of social investment. Here’s a copy of my powerpoint, with bullet points and a few illustrations. Comments welcome.