by folbre on November 27, 2018 in care policy in the electoral arena • 0 Comments 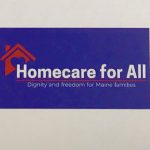 As the dust settles from the mid-term elections, I look back at the fate of a referendum in Maine with special regret. The proposal to fund home care for all disabled and elderly residents was well-designed. It had the support of a strong grassroots campaign (for more details, see websites for the  Maine People’s Alliance and Mainers for Home Care ). It included provisions for better pay and working conditions for home care workers. It would have been funded by a progressive tax.

Maine has an especially large elderly population, largely due to outmigration of young people; a relatively high percentage of its residents have either received or provided home care.

The wording of the ballot initiative was exceptionally clear: “Do you want to create the Universal Home Care Program to provide home-based assistance to people with disabilities and senior citizens, regardless of income, funded by a new 3.8% tax on individuals and families with Maine wage and adjusted gross income above the amount subject to Social Security taxes, which is $128,400 in 2018.”

It met strong opposition and preposterous rhetoric from representatives of the Maine State Chamber of Commerce, Maine Hospital Association and Home Care & Hospice Alliance of Maine, which described the proposal as a scam to impose left-wing regulation on the state’s home care industry.

I’d like to learn more from the activists involved about why the proposal failed, but the role of well-financed  employer opposition seems to have been pivotal. A similar process unfolded here in Massachusetts, where a referendum on mandatory nurse staffing ratios for hospitals elicited well-coordinated–and often misleading–push-back from the powers that be (about which, stay tuned for another post).

← After the Care Crisis
Care, Affluence, and Development →