Heroine of the Noisy Revolution 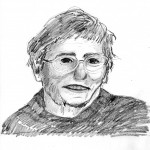 Claudia Goldin famously described the dramatic movement of women into paid employment over the course of the twentieth century as a “quiet” revolution of cumulative labor supply decisions.

But this revolution had its noisy moments, and its noisy advocates, among them the magnificently noisy Barbara Bergmann. Barbara never denied the relevance of individual choice. But she emphasized the institutional structures and cultural norms that have traditionally constricted women’s choices, and she chose to challenge them.

In The Economic Emergence of Women she described a literal caste system in which people were labeled “pink” or “blue” and those labels determined not only their roles in the economy, but the ways they were taught to accept those roles.

She never agreed with the notion that economists should take individual preferences as a “given.” In fact, she often suggested that women were hoodwinked into internalizing some very expensive preferences of care and concern for others.

She also believed in the power of individual indignation and she knew how to exercise it on a daily basis. For instance, she loved to eat fine food, but hated the conspicuous division of labor largely based on gender and race evident in most upscale restaurants.

She had a little card printed—the size and shape of a business card—saying something like this: “Your business appears to allocate tasks based on race and gender. I hope you are aware that you may be in violation of federal anti-discrimination law and you may also be alienating valuable customers like myself.”

She would sometimes ask a waiter to send the manager over to her table. He usually came expecting praise for the cuisine. Instead she would hand him the card with a stern glance, usually leaving him speechless.

Of all Barbara’s important contributions to economic theory, my favorite is the short “Economic Risks of Being a Housewife,” which appeared in the American Economic Review in 1981. In it, she explained why housewives should be considered members of a particularly disempowered and risky occupation.

Whatever benefits it offered, it left them vulnerable to the economic insecurity typically resulting from divorce.

Much of my own work builds on this argument, focusing on the economic risks of being a paid or unpaid caregiver. Gender inequality cannot be reduced to inequalities between men and women in the same household or the same workplace. It also encompasses profound gender inequalities in the costs of caring for dependents—inequalities that can be measured in both time and money.

As Barbara intuited, care for others is a costly preference. As the angry Cersei in the HBO melodrama Game of Thrones put its “the more people you love, the weaker you are.”

In my view, caring preferences have contradictory consequences—punishing in some respects, rewarding in others; costly for individuals, valuable for society.

Barbara often warned me not to idealize caring preferences. She worried that more public support for family work would, by reducing its costs, encourage women to take on more responsibilities for it than men.

In his 1988 book Women’s Quest for Economic Equality, Victor Fuchs suggested that single mothers were more vulnerable than fathers to poverty because they derived so much satisfaction from taking custody of their children. This was, after-all, a revealed preference. If they wanted to, they could have relinquished their children to foster care.

Barbara once accused me of being Victor Fuchs in drag. I don’t think this is true. But I am pretty sure Victor Fuchs would have been more horrified by the suggestion than I was.

I miss Barbara. No one sharpened my thinking more, or set a better example of testing the edge. Every time I am tempted to whine about the sorry state of the world or succumb to slightly girly sentimentality I give myself a little slap in the face to remind myself of a formidable and fearless heroine of the noisy revolution.

This post is based on my presentation at the session “Inequality, Public Policy, and the Future of Economics: In Memory of Barbara Bergmann,” organized by Diana Strassmann, at the meetings of the American Economic Association in San Francisco, CA, January 5, 2016.

3 comments for “Heroine of the Noisy Revolution”