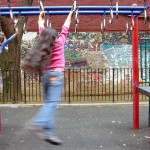 Like a little kid who has just gotten a grip on the monkey bars, universal childcare has finally made it to the national political arena. President Obama has been cheering it on from his oddly sidelined position, and his office has effectively  summarized the definitive economic case for public investment.

Hillary Clinton puts child care front and center in her campaign. A recent Washington Post article by Greg Sargent labels universal child care the “next big liberal cause” and describes a new plan soon to be proposed by Senate Democrats.
The changing international scene suggests that fundamental economic forces may be reshaping the playground. In Britain, Tory prime minister U.K. David Cameron has promised to double free child care. In Canada, New Democratic Party leader Tom Mulcair has made $15 a day child care a central plank of his party’s election platform.

What can policy researchers do to help shape the upcoming U.S. debate? I can think of a lot of interesting possibilities that I’ll explore in future posts. For now, I throw out three specific recommendations:

1) Keep it simple. Existing child care subsidies vary across states; eligibility standards are difficult to understand, and eligibility doesn’t guarantee access. Long waiting lists are common. Politicians find it easier to promise child care than to actually deliver it.Tax breaks and other incentives complicate the picture. The result is not just confusion, but resentment. The British policies now being debated are so layered that its difficult for an outsider to even understand them. U.S. voters need to understand exactly what is on the table.

2) Avoid means-testing. This follows from number 1 above. Targeting public provision to low-income parents is unfair to middle-class families with dual earners who have a hard time making ends meet even if they are technically above eligibility standards based on a federal poverty line that is not adjusted for regional differences or for available family time.  Publicly-provided child care is not primarily a poverty-alleviation strategy, but an investment in human resources that will both reduce parental stress and increase economic productivity.

3) Emphasize quality. Expansion of child care and early education cannot succeed unless they deliver high quality care. This will require, among other things, better pay for child care workers. Integrating early education into our existing school system, as in the so-called PK-3 approach, would be a great idea. Note that the Canadian province of Quebec, which pioneered the approach now being proposed on the national level suffered from blow back about quality standards and effects on child outcomes.

I also think it would be a good idea to package child care with other pro-family policies, including paid family and sick leaves from employment, reduction of pay/benefit penalties for part-time work and public recognition of the value of unpaid family care. Families need flexibility and those who leave paid employment in order to care for dependents should receive some compensation, such as credits for Social Security contributions. But this is a topic for another post…

3 comments for “Elect for Child Care”