by folbre on January 12, 2009 in wages and working conditions in paid employment • 5 Comments 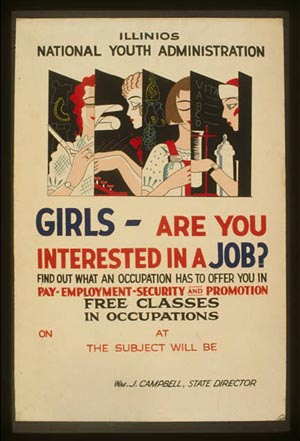 The case for “green jobs” took off in fall 2008, when my colleagues at the Political Economy Research Institute (PERI) began publicizing their estimates of the potential jobs that could be created by public investments in conservation and alternative energy. I began wondering out loud and on line about the gender composition of the jobs that would be created.

Despite efforts to increase women’s participation in traditionally male jobs, such as construction, occupational segregation in the U.S. remains significant. Why not advocate for “pink jobs” as well as “green” ones–jobs in health, education, and home care that would provide more opportunities for women workers and also offer long run economic benefits?

An op-ed published in the Boston Globe by Randy Albelda made this point forcefully, as did one by Linda Hirshman in the New York Times. A group of feminist historians circulated a letter on line pointing out that President Roosevelt’s New Deal job creation programs were primarily aimed at men. As the graphic above suggests, the National Youth Administration did ask girls if they might be interested in “free classes in occupations.” But only about 20% of the Works Progress Administration (WPA) jobs went to women.

Last Saturday morning President-elect Barack Obama’s economic team published a report claiming that, if anything, the proposed fiscal stimulus would be skewed in favor of women. I am not persuaded by their estimate that women would get 42% of the jobs, which seems to be based on simplistic assumptions regarding the industrial composition of the jobs created. But maybe they know more than I do about the proposed job plans, since presumably they are the ones designing it.

I am more seriously troubled by their careless reasoning regarding the “skew.” I take their point that men have been harder hit by job losses over the last year. Only about 20% of the decline in payroll employment from December 2007 to December 2008 was female. On the other hand, about 34% of the increase in unemployment over that same period was female. Many women affected by the recession and stock market decline started looking for paid work.  As of December 2008, women represented about 47% of the civilian labor force. (Click for source)

As the recession continues, the indirect job losses will mount, and female and male unemployment rates are likely to converge. Keep in mind, also, that women earn less than men but are more likely to be sole supporters of children.

My concerns don’t override my support for the fiscal stimulus plan and, honestly, I’m not sure what the target impact for male vs. female jobs should be. But I am sure that investments in “pink jobs” could yield important benefits (see also Paula England’s op-ed on this point) . If the job-creation plan goes into effect, which I hope it will, we need to  monitor who gets what jobs–and at what wages.

P.S. A great piece on this topic was just posted on Women’s ENews. Plus the comments below make some very important substantive points.

← What is She Worth? How to Value (Or Not to Value) a Woman’s Life
Recovering from the NYT →

5 comments for “Jobs for Whom?”