by folbre on June 9, 2008 in measurement and valuation of unpaid care work, uncategorized • 1 Comment 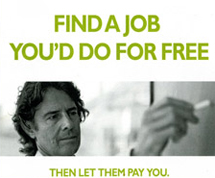 This ad from monster.com (a job-search site) caught my eye, a reminder that most people hope for a job that will be intrinsically satisfying. Neoclassical economists generally define work as an activity that is only a means to an end–people presumably work only until the utility of the additional income (or home-produced services) is no greater than the disutility of an additional hour of work.

I’ve never liked that definition, but to my surprise I just read one I liked even less, in a New York Times Freakonomics column published by Steven J. Dubner and Steve Levitt: They suggest the following: “It’s work if someone else tells you to do it, and leisure if you choose to do it yourself.” This definition makes it sound like neither self-employed nor self-motivated individuals do any work.

In a nice response published on the Freakonomics blog, Shoshana Grossbard explains how this definition ignores the kind of work that goes into making dinner for a spouse.

The original Freakonomics piece was inspired by a working paper by economists Valerie Ramey and Neville Francis, who use survey responses regarding subjective feelings of happiness to rank activities as work or leisure. A burgeoning literature explores these subjective rankings, and I’m captivated by a proposal by Alan Krueger and others that we develop more systematic forms of time accounting.

But I think we should make a distinction between subjective and objective measures of work, and come at the issue from both directions. In her classic Economics of Household Production, published in 1934, Margaret Reid argued that an activity should be considered work if someone could, in principle, be paid to perform it. Most time-use surveys either use this so called “third-party” criterion or ask whether an activity creates benefits for someone other than the person performing it.

This objective criterion is no less reasonable than an arbitrary cut-off point on a happiness scale, and provides a better measure of social rather than purely individual benefits. Efforts to revise our national income accounts (which don’t take anyone’s feelings into account) should define non-market work in objective terms.

If we developed National Happiness Accounts on the side, that too would make me happy.

← Children as Pets
The Motherhood Penalty →