by folbre on June 6, 2008 in measurement and valuation of unpaid care work • 1 Comment 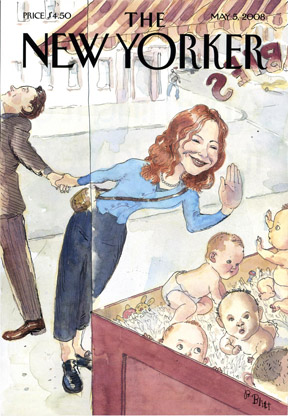 This recent New Yorker cover satirizes the notion that children, like puppies in a store window, are just another consumer good. I think the gender stereotyping is intended as a joke, though not all viewers would take it that way.

This children-as-pets notion is deeply embedded in our culture, and I’ve been fuming about it for years (See The Invisible Heart and, more recently, Valuing Children) . Unlike most pets, most children grow up to provide effort, energy, talent and tax revenues that benefit the rest of us. This is one reason why parental efforts deserve public support.

Debates over the economic significance of childrearing have shaped debates over taxation in the U.S. In a classic treatise of public finance published in 1938, Personal Income Taxation, Henry Simons wrote, “it would be hard to maintain that the raising of children is not a form of consumption on the part of parents, whether one believes in the subsidizing of such consumption or not.” (p. 140). In Agenda for Progressive Taxation, published in 1947, William Vickrey wrote

“This reduction of children to a status comparable to that of a household pet is hardly acceptable. Almost everyone will concede that the community has a greater interest in the welfare of children than in the welfare of pets, even though there may be widespread disagreement as the nature of that interest. A more satisfactory approach, on the whole, is to regard minors and other dependents as citizens in their own right.” (p. 292).

Most economists today stop short of viewing childrearing as a productive contribution. When they talk about “human capital” they typically refer to educational inputs, taking parental inputs for granted. Or, they assign a value to human capital based on its future yield (net present discounted earnings) ignoring its historical cost. Some of these issues are discussed in Chapter 4 of the National Academy publication Beyond the Market (both Robert Michael of the University of Chicago and myself contributed significantly to that chapter).

Every Mother’s Day, the job search site www.salary.com publishes an interesting calculation of how a mother’s activities would be priced in the market. A paper I recently wrote with Jayoung Yoon assigns a very conservative, lower-bound replacement cost value to the time that parents devote to childrearing,(“The Value of Unpaid Child Care in the U.S. in 2003,” forthcoming in Jean Kimmel, ed., How Do We Spend Our Time? Recent Evidence from the American Time-Use Survey). Both offer a good antidote to the trivializing impact of images like the one above.

← Servant Sisters
Is it Work? →