I am in healthcare and can quote ad nauseum the long term effects that alcohol and drug abuse can cause a person.  Those pearls of wisdom sometimes seem to fall flat in my house, where there are lots of blank stares and the occasional eye roll when I speak to my college age kids about various topics, but, especially when discussing serious issues such as alcohol abuse.  The cautionary tales dredged up from (and occasionally elaborated upon) my youth have all been heard.  Even though “Jim” my college friend freshman year who quickly moved from binge drinker to alcohol rehab patient and ex-college student all in the course of 2 semesters was at the time their age, they still hear “Jim” as something that happened a long time ago and not really relatable.

Alcohol use continues to be a challenge for many UMass Amherst students and causes concern among many parents and university staff.  Yet, when you are 19, you viscerally believe you will always be 19 or 20 or 21 and look and will feel exactly like you do now — despite all the evidence to the contrary.

Specifically, below are 6 physical changes that can start after just one or two nights of even moderate drinking, let alone 12 hours of nonstop day and night drinking.  Ask your student to look in the mirror and consider:

In trying to help your student fully grasp the dangers of alcohol abuse, concentrating on the immediate changes in a college student’s body after a night (or a semester) of binge drinking can often get his or her attention.  Turns out you don’t have to abuse alcohol for 10 years in dive bars to begin to exhibit some negative physical signs of alcohol abuse.    For young adults worried about their looks, letting them know how alcohol abuse will impact their appearance and health can make a challenging topic highly relevant and open up a broader conversation.

Submitted by Shannon Cullagh.  Shannon holds a Masters of Physical Therapy degree and is the mom of a UMass sophomore political science major class of 2019. 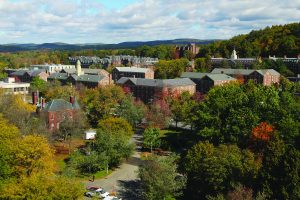