UMass Amherst economics professor Deepankar Basu presented his on-going research (with Amit Basole) on the relations of production, modes of surplus extraction and the evolving class structure in India at the 2010 Historical Materialism Conference in NYC which was held in January.

In her recent New York Times Economix blog, UMass Amherst economics professor Nancy Folbre explains that we don’t really have an accurate calculation of the cost of caring for family (which includes elder care, child care, college education and so on) because we  have not developed a Dependent Price Index.

Economix
February 1, 2010
How Much Do We Spend Caring for Family?
By:  NANCY FOLBRE

Many social scientists, myself included, are struggling to quantify and analyze these trends. We need to develop a more systematic and unified approach.

Trends in real wages are typically adjusted for changes in the cost of living, as measured by the consumer price index. While this index needs improvement, no economist I know would ignore the need for it.

Trends in family income, however, are never adjusted for changes in the cost of caring for dependents, because we have not developed a comprehensive Dependent Price Index. The Department of Agriculture regularly estimates family expenditures on children, but ignores both the costs of college and the value of parental time.

Gerald Espstein, UMass Amherst economics professor and co-director of  the Political Economy Research Institute, was recently interviewed by The Real News Network.  Epstein discusses solutions to the problems created by large amounts of capital and the speculation it creates that isn’t connected to the everyday economy.  Alternatives to our current financial system, Epstein suggests, could include publicly controlled or oriented financial institutions that are engaged in credit for real investment, as well as democratizing the Federal Reserve.
(The Real News Network, 1/27/10)

In her most recent New York Times Economix Blog, UMass Economics Professor Nancy Folbre examines the Family and Medical Leave Act (F.M.L.A.).  She argues that even if an employee qualifies, (their employer must have more than 50 employees and the employee has to meet the federal workplace eligibility requirements) a significant percentage of workers can’t afford to take unpaid leave.

Do you have the right to take an unpaid family leave from work? And could you afford to take one if you needed to?

The federal government guarantees some American workers the right to 12 weeks of job-protected unpaid leave from paid employment in order to cope with their own illness, that of a spouse or parent, or the birth or adoption of a child.

But recent research on the Family and Medical Leave Act (F.M.L.A.) signed into law by President Clinton in 1993 suggests that limited coverage, poor compliance and economic constraints combine to reinforce existing inequalities between men and women, rich and poor.

Gerald Friedman, professor of economics at the University of Massachusetts, has been consulting with the Vermont State Employees Association as to whether or not the Vermont Legislature should enact changes to the employees’ pension system.  These changes, recommended by a special commission headed by Treasurer Jeb Spaulding, would, according to Spaulding, save the state as much as $29 million next year.

Last week, Friedman made a presentation to the the House Government Operations Committee.  He argued that he didn’t see a crisis necessitating the changes Spaulding and the commission had recommended.  “I see a pension plan in good shape,” he said.  “My suggestion to you would be to punt for a while. You don’t have to do anything.”
(BurlingtonFreePress.com, 1/16/2010)

In June 2009 James Boyce, UMass Amherst economics professor, was appointed by Gov. Arnold Schwarzenegger to the Economic and Allocation Advisory Committee, charged with advising the state of California on implementing a cap-and-trade system to reduce greenhouse gases.

The Economic and Allocation Advisory Committee released its final recommendations earlier this week.  The committee recommends that California “rely principally, and perhaps exclusively, on auctioning as the method for distributing allowances,” and that roughly 75% of the auction revenue “should be returned to households either through lump-sum payments or through cuts in individual income or sales tax rates.”  The committee recommends that the remaining 25% be devoted to public investments in the clean energy transition.

Cap and Dividend: A State-by-State Analysis, a PERI Working paper by UMass Econ Professor James K. Boyce and Ph.D. student Matthew Riddle, is in play this month in Washington in the debate over how best to price carbon and distribute the proceeds. Boyce and Riddle point out that auctioning 100 percent of carbon permits and returning most of the auction revenue to citizens on a per capita basis would provide significant net benefits to the majority of citizens, even in carbon-intensive states.

This profile of Lee Badgett announcing her upcoming Distinguished Faculty Lecture appeared in a recent edition of UMass In The Loop.

M.V. Lee Badgett, professor of Economics and director of the Center for Public Policy and Administration, will deliver the first Distinguished Faculty Lecture in this year’s series on Monday, Nov. 9 at 4 p.m. in the Bernie Dallas Room in Goodell Hall.

Badgett’s lecture is titled “From I Can’t to I Do: When Gay People Get Married.” Five years after Massachusetts became the first U.S. state to permit same-sex marriage, local and global debates still focus on several key questions. These include whether gay people will change marriage or whether marriage will change gay people. There is also debate about whether we are moving too fast in changing marriage laws. Drawing on the Massachusetts experience and extensive data from the Netherlands, Badgett seeks to address these questions. She will compare her research findings with what happens in other countries and states with and without legal marriage rights for same sex couples.

A faculty member since 1997, she is currently professor of Economics and director of the Center for Public Policy and Administration. Badgett also serves as research director at the Williams Institute at the University of California, Los Angeles School of Law. Badgett’s current research interests include sexual orientation and discrimination in labor markets, family structures and family policy, especially same-sex partner recognition in the U.S. and in Europe and domestic partner health care and pension benefits.

She is the author of “When Gay People Get Married: What Happens When Societies Legalize Same-Sex Marriage,” published in August. Badgett is also the co-editor along with Jeff Frank of “Sexual Orientation Discrimination: An International Perspective,” published in 2007 and author of “Money, Myths and Change: The Economic Lives of Lesbians and Gay Men,” published in 2001. She is a frequent commentator in the news media and has appeared in magazines and newspapers across the U.S., including the New York Times, Slate, and The Nation.

Badgett was a visiting professor at the UCLA School of Law from 2005-07 and during the summer of 2008. She was a visiting researcher at the Amsterdam School for Social Science Research at the University of Amsterdam in 2003-04; assistant professor at the School of Public Affairs at the University of Maryland, College Park from 1990-97; was visiting assistant professor in women’s studies and lesbian and gay studies at Yale University from 1995-96 and was a research analyst for the National Commission for Employment Policy at the U.S. Department of Labor in the summer of 1994.

A reception follows the lecture, which is sponsored by the offices of the chancellor and the provost.

Filmmaker John de Graaf, critically acclaimed producer of Affluenza, The Motherhood Manifesto, and other socially relevant yet entertaining documentaries, debuted his new film, “What’s the Economy For, Anyway?”  at an event 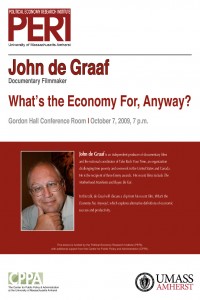 sponsored by PERI, CPPA, and the Department of Economics at Gordon Hall  on Wednesday, October 7, 2009.