This post by UMass Amherst Department of Economics Professor Emeritus Nancy Folbre was originally published on June 3, 2013 by The New York Times. 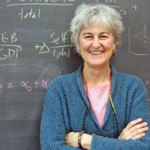 Unless Congress can overcome its partisan differences, interest rates on federally guaranteed Stafford loans, an important means of paying for college, will double to 6.8 percent in July.

With the Bank on Students Loan Fairness Act, Senator Elizabeth Warren, Democrat of Massachusetts, proposes to reduce this interest rate to the same level that large banks pay for loans from the Federal Reserve Bank — 0.75 percent — for at least one year, during which longer-term remedies could be explored.

The bill, one of many aimed at addressing the scheduled interest-rate increase, seems unlikely to win passage. But it highlights the double standard that puts the interests of banks and other businesses well ahead of those of students and ordinary people when it comes to debt relief.

As Robert Kuttner explains (both in The New York Review of Books and in his new book “Debtors’ Prison”), bailouts and bankruptcy proceedings both provide a means for businesses to get out from under bad debt. The obligations of a college loan, by contrast, “follow a borrower to the grave.”

The rolling thunder of accumulating student debt sounds a lot like the perfect storm of mortgage liabilities that threatened major financial institutions and precipitated the Great Recession in 2007.