Professor Arindrajit Dube’s research on minimum wage has been widely cited in the media. In the paper Minimum Wage Effects Across State Borders: Estimates Using Contiguous Counties, Dube and co-authors, T. William Lester and Michael Reich, examined minimum wage policies between 1990 and 2006, comparing all contiguous county-pairs in the United States that straddle a state border, and found that an increased minimum wage does not have adverse employment effects. Dube told the Wall Street Journal that there is no “evidence of any loss of employment or hours for the type of minimum-wage changes we have seen in the U.S. in the last 20 years.”

President Barack Obama cited this study during the 2013 State of the Union address in support of raising the federal minimum wage to $9.00 per hour. 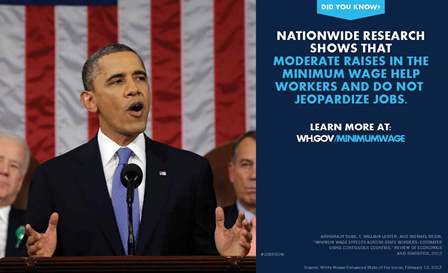