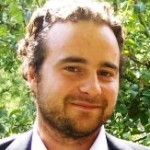 Charalampos Konstantinidis, UMass Amherst graduate student, has received a William Waters Grant from the Association for Social Economics. Konstantinidis was awarded the $5,000 grant for his research proposal, “How Resilient Is ‘Green’? Organic Farmers in the Crisis of European Capitalism.”

The William R. Waters Research Grant was established in 1999 in honor of William R. Waters, editor of the Review of Social Economy for many years and President of ASE in 1987.  The grant was first awarded for Summer, 2000.

The purpose of the William R. Waters Research Grant Program is to inspire economists to organize their research in social economics and social economy along the lines suggested by William Waters in his 1988 presidential address to the Association for Social Economics.

The major concern of social economics is explaining the economy in its broadest aspects; that is, showing how human beings deal with the ordinary business of using human and physical resources to achieve a level of material comfort. Explanation includes cultural, political, and ethical details as they are needed for a full understanding. As in any economics, there are three parts to social economics. First is the philosophical base of the social economist, which may or may not be a reflection of the philosophical base or ethos of the society he/she is studying. Social economics (or any economics) builds upon it. It is the hard core as in the recent popular literature of the philosophy of science. The second part of the discipline is a description of the significant characteristics of the economy. The economist must observe the multiplicity of economic reality and abstract those characteristics that are substantive. The two together, the philosophical premises and the empirical observations, will determine the third part of the discipline, social economic policy. Policy formulation is thus a mix of the first two. [William R. Waters, presidential address, “Social Economics: A Solidarist Perspective,” Review of Social Economy, 1988, p. 113 ff.].