Robert Pollin, UMass Amherst economics professor and co-director of the Political Economy Research Institute (PERI), helped to organize a conference on the topic of “Major Economic Challenges Ahead in Building a Clean-Energy Economy in the United States.”

The conference was held in March at the Surdna Foundation’s headquarters in New York City and brought together researchers whose work addresses the economic challenges of transforming the United States into a clean-energy economy over the next 20-30 years.

According to Pollin, “The overarching purpose of our conference was to explore more deeply the ways in which a clean-energy investment agenda can become a centerpiece of economic policy in the U.S. over the next generation.  Lots of important ideas came out of the conference.  Most importantly, the conference enabled us to see more clearly both how much we have achieved to date and the major challenges that we face moving forward.” (Surdna Foundation, 4/28/10)

A columnist responds to an April 26 Economix blog posting in the New York Times by Nancy Folbre where she discusses the issue of salary disparities between men and women and how that played a role in the recent economic meltdown. Folbre says the linkage between high pay and productivity seems to be fraying in our society, and instead people are reaping large rewards for aggressive and cynical opportunism that isn’t very socially productive. She also points out that women tend to be less aggressive and Machiavellian in business with negative impact on their pay rates. Folbre suggests creating a pay system that actually rewards productivity and penalizes bullies and cheats. (Salon.com, New York Times, 4/26/10)

According to Richard Wolff, UMass Amherst economics professor emeritus, what is happening in Greece will parellel financial crises to come in other capitalist economies like Ireland, Spain and Portugal.

With too few taxes flowing to the state from employers and workers to finance its programs for both of them, the state must borrow the difference between tax revenues and programs’ costs.  By borrowing, the state escapes, at least temporarily, the dilemmas of its position within capitalism’s class struggles.  It postpones the day of reckoning until it can no longer borrow its way out of those dilemmas.  Now, the global crisis of capitalism has brought Greece that day of reckoning, just a little sooner than everywhere else. 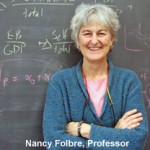 In a NY Times Economix blog, Nancy Folbre, UMass Amherst economics professor, examines research that seems to discredit the conventional economic theory that people’s pay is linked strongly to what they conribute to society.  There is reason to believe that pay differences among individuals, including between men and women, may be tied to differences in personality, preferences and principles as much as productivity.

Men score significantly higher than women on Machiavellianism and aggressiveness, which may help explain why 15 times as many men as women were in prison in 2008.

These traits also have significant consequences in the labor market. Research suggests that women are less Machiavellian, more agreeable and more altruistic than men, with negative consequences for their earnings.

These personality traits may impair women’s success in bargaining for higher pay. It’s hard to believe that they lower women’s overall contribution to society.

Gerald Epstein, professor and chair, economics, comments in a story about what is and isn’t in the financial regulations bill that is expected to pass the U.S. Senate soon. One thing missing from the new federal law is a way to control the credit ratings agencies that are supposed to accurately gauge the risk associated with investments. He calls for an indirect method of paying these agencies to remove the conflict created when banks create investment vehicles and then pay for the ratings agency. (Marketplace [NPR], 4/23/10)

The Independent People’s Tribunal (IPT) on Land Acquisition, Resource Grab, and Operation Green Hunt was held recently in New Delhi.  The tribunal brought grassroots voices from different parts of the country protesting against neoliberal economic policies and corporate resource grab.  In his article, “The Independent People’s Tribunal Reveals the Underbelly of Indian ‘Development'” Deepankar Basu, UMass Amherst economics professor, gives context to the three-day event by detailing the current political and economic climate in India.  For example, the combined net worth of the richest 100 Indians in 2009 was US$ 276 billion, yet, as of 2004-2005, roughly 80 percent of Indian households did not have access to safe drinking water.  Additionally, the resource grab that is underway has already displaced upwards of 300,000 indigenous people. (MR Zine, 4/17/10 and ZNet, 4/20/10)

Running for three days, from April 9 to April 11, the IPT heard accounts of diverse grassroots activists from the states of Chhattisgarh, Orissa, West Bengal, and Jharkhand, the theater of an insidious war — nicknamed Operation Green Hunt (OGH) — that the Indian State has launched against its own people.  Supplementing activist accounts and testimonies of witnesses with critical insights and advice of social scientists, journalists, legal experts, former government functionaries, and human rights activists, the people’s jury of the IPT made its opinion known through its interim observations and recommendations, the most urgent of which was to stop OGH and initiate a process of dialogue with the local population in the affected areas.1 Other recommendations included: immediately stopping all compulsory acquisition of agricultural or forest land and the forced displacement of the tribal people; making the details of all the memorandum of understanding (MOUs) signed for mining, mineral, and power projects known to the public; stop victimizing and harassing dissenters of the government’s policies; withdraw all paramilitary and police forces from schools and hospitals; constitute an Empowered Citizen’s Commission to investigate and recommend action against persons responsible for human rights violations of the tribal communities.2

James Crotty, UMass Amherst economics professor emeritus, says financial sector profits have been high in recent years because managers are taking more risks, but they aren’t always revealing that to the public.  In a 2007 paper, Crotty questioned whether financial investment strategies that were once considered too risky to adopt, but made safe (and profitable) by modern risk-management techniques would increase the likelihood of a future systemic financial crisis.  (Rortybomb, 4/19/10 and Financial Post, 4/21/10)

An analysis of auto shredding capacity in the scrap metal market cites a 2002 article by James Crotty, UMass Amherst economics professor emeritus, which says global excess capacity is difficult to measure or even define. (Recycling Today, 4/20/10)

In an article for MR Zine, Rick Wolff, UMass Amherst economics professor emeritus, argues that the current economic recovery plan, using public money to refinance failed banks, has not worked.  Wolff offers an alternative plan;  the federal government could finance rehiring of the unemployed with two qualifications:  at least half of goods and services produced would have to be green and, second, the enterprises created to re-employ people would differ from traditional capitalist corporations by establishing genuine economic democracy at the workplace.  (MR Zine, 4/18/10)

Nancy Folbre’s book, Saving State U:  Fixing Public Higher Education, was reviewed by the Inside Beat.   The book, which makes a case for strengthening public support for higher education, received a favorable review.  “Folbre’s writing, in both style and context, doesn’t pull any punches, which is really refreshing, especially in a debate such as this. Using hard data about tuitions and other incurred costs, she stresses the need for government funding in state universities. Her accessible style and clear-cut ideas help to take a complex issue that affects thousands across the nation and break it down into logical, effective arguments.”