Economics welcomes its new (and former) chair, Professor Jerry Epstein. Here’s the coverage from the College of Social and Behavioral Sciences.

Like many children of the 1960s, Jerry Epstein, new chair of the Department of Economics and co-director (and co-founder) of the Political Economy Research Institute (PERI), came into adulthood wanting to make the world a better place. “Since economics is one of the key driving forces of our social and political life, I realized that to understand the world and try to change it, I would need to learn more about it ,” Epstein reflects. “That’s why I chose economics, along with political science, as my undergraduate course of study at Swarthmore College.”

From the beginning, though, Epstein was critical of standard approaches to economics and looked for alternatives. “In the 1960s I observed a society that was riddled with war and inequality but my economics courses were not addressing these issues at all.” In graduate school at Princeton, he found a lot of inspiration in the writings of “radical” economists like James Crotty, Sam Bowles, Herb Gintis and David Gordon. “I remember thinking, wouldn’t it be great to teach at a place like UMass Amherst, home of the first three, or the New School, where Gordon taught,” Epstein says. As it turned out, after teaching at Williams College, he landed a job teaching at the New School and in 1986 became an assistant professorship at UMass Amherst.

“I feel like I’ve been blessed with a lucky star, getting my dream job,” Epstein adds, noting that these individuals, who became his senior colleagues, also became extremely important mentors. “The College of Social and Behavioral Sciences in fact has a collection of truly remarkable people—faculty in many departments and administrators in the Dean’s Office. It is big enough to get a lot done and be interesting and small enough that it feels like a community. I hope that doesn’t change.”

Meeting Robert Pollin, then a graduate student at the New School, at a conference when Epstein too was in graduate school marked the beginning of another enterprise. “We became friends, and later associates at UMass Amherst,” he says. “When he was a professor at the University of California at Riverside, we came up with the idea of starting a research institute. The outcome about 12 years ago was the creation of PERI. We do nationally recognized work in egalitarian macroeconomic policy analysis for the U.S. and elsewhere in the world, the development of green jobs, peace building and the environment, living wages, financial reform, and other areas.”

Epstein’s focus has been researching financial markets and monetary policy, including the Federal Reserve. “I have studied the role of the influence of banks and other powerful actors in affecting monetary policy and have, along with others, developed ideas for reforming the Fed and the financial system, making it more democratic and accountable. We are facing the worst economic crisis since the Great Depression and one of the causes was poor financial regulation,” Epstein says. “Recently, I brought together a group of economists, analysts and policymakers who are devising solutions to the crisis and developing reforms to dramatically reduce the chances of this happening again.”

Taking over as chair of the Economics Department, Epstein says, is likely to be exhilarating and frustrating at the same time. Speaking from his earlier experience of leading the department ten years ago, he says, “I’ll really enjoy getting to know everyone in the department and many more people, both faculty and administrators, around the University. It’s so easy to live in your own little world here on campus, but as chair you get pulled into the large world of the place. You won’t like everything you see, but you get to see and experience a lot. It’s also fun to get to know alumni, many of whom have devoted an enormous amount of time and energy to helping our department.”

Epstein says that he loves working one-on-one with students, both graduates and undergraduates. “Of course, I have to teach my share of large lectures too, but it is the person-to-person discussions and advising that I truly love.”

In Epstein’s “off-campus hours” he enjoys speaking to non-academic groups interested in economic issues which he has done for many years through the Center for Popular Economics, an Amherst based group of economists that teaches the subject to lay people and political activists. “I also am married to a woman who insists that I do at least half the housework and child care. In fact, she wrote the book on this. (Halving It All: How Equally Sharing Parenting Works (Harvard University Press) by Francine Deutsch, professor of psychology at Mount Holyoke). I also try to find some time to study French—when I finish my household chores.”

But mostly, Epstein’s life revolves around the Department of Economics. “It is one of the top departments in the nation for giving a critical understanding of how our economy works and for helping students find a constructive area of interest to pursue in their lives,” he notes. “We have a strong alumni group that supports students. Our faculty are committed educators who are also deeply involved in the important issues of the day: global warming, gender equality, gay and lesbian issues, employment and equality, economic development, financial reform and regulations, to name just a few.”

UMass Professor Emeritus Rick Wolff has electrified audiences nationally with a lecture based on his new book, Capitalism Hits the Fan: The Global Economic Meltdown and What to do About It.  He recently spoke at UMass. 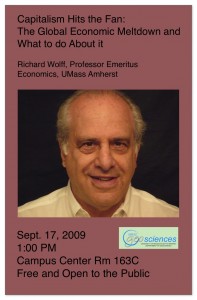