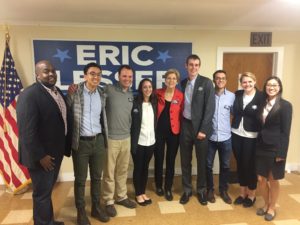 My fellow staff members and I after organizing a stumping event.

By the time most students reach their junior in college, they will have already figured out what field they are interested in entering following graduation day. Some will go on to grad school to study law and eventually serve justice in the circuit courts while others will go to medical school and go on to take care of the rest of us. They do those things because they know them and because they are certain of the skills necessary to excel at those types of jobs. Unfortunately, not everyone is so certain of the skills they possess and what to do with them. By the end of my junior year, I had learned quite a bit about myself (I’m an avid current events nut), the things I liked (the political sphere), and the things that I was relatively good at (writing and verbally communicating with anyone). The increase in self-awareness I underwent, however, did nothing to steer me down a set path for my future because I was still feeling uncertainties. I really wanted to use my personality to get involved in the political world in some capacity. I didn’t exactly know how, but I knew that I had to get my foot in the door somehow.

Finding an internship for the then upcoming summer internship period proved to be a struggle for me. I applied to ten places and didn’t hear back from several. A couple of rejection conversations were had as well. I decided it would be best to at least get one of those intermittent summer jobs and look for a fall internship instead. So, rather than pushing pencils in the Boston financial district throughout the dog days of summer, I was dropping bread into a toaster and making chicken fingers for hungry customers in the back of a greasy kitchen at Mansfield’s neighborhood Cafe on the Common. I was a fry cook who didn’t wish to remain one, although I would for the duration of the break.

As a registered Democrat, my values, particularly my social values, align greatly with the values of the party, such as affordable housing and affordable college. As a crazy Huffington Post liberal, Senator Warren is as close to a celebrity as you can find within the political community, particularly amongst those that label themselves as progressives. In May of 2016, I was on the hunt for internships and decided civil service might be a good fit for me, so I aimed high and sent an email along with my resume and the first cover letter I had ever written expressing interest to Senator Warren’s internship coordinator. Ironically, I forgot about sending it in completely until I got an email asking to finish the online portion of the application one week before the deadline. I finished it on time.

In the middle of a hot August Wednesday inside a kitchen that felt like the equator, I received a phone call from a United States Senator’s office. I was wearing a smelly apron and non-slip shoes; far from the suit and tie a Senator would wear to work, and yet my phone had a voicemail on it asking me to come to the Senator’s office for an interview because I had been chosen as a candidate.

My grandmother had passed away not six months prior to the interview, so I already had just been fitted for a new suit. The suit was made up of a charcoal pair of slacks, a charcoal blazer, a blue shirt, a striped tie, and black dress shoes that made me feel like I belonged as I showed the man at the front desk my security credentials like I owned the place. You know what they say: “Look good feel good.” I certainly felt both.

Once in the office, I shook hands with the director of the program and her immediate boss, who was sitting in the office I was being interviewed in. As someone with no political experience other than my minor courses and personal research, I knew that the only way to land this job was to make them like me as an individual and not a political expert. I treated the interview like a conversation one might have with an old friend. I tend to not be too reserved once my mouth starts moving and the interview went on from there. After twenty minutes and only a few questions with long answers, we stood to shake hands over the table in the office. I don’t know how, but I knew I got the job when I shut the door. I was so sure that I called my parents to tell them.

Four weeks after the interview, all of the interns from both the Boston and Springfield offices met up for a mandatory internship orientation. There, we learned about what duties we would be expected to perform, as well as the character we were to exemplify as employees of such an influential person. It was, of course, exciting to begin the process, but the presentations were long, drawn out power points filled with logistical content that would lull even the most excitable and optimistic individual to sleep. Fortunately, Senator Warren barged into the conference room to give a brief pep talk outlining her mission. From that moment on, her mission became our mission, and my professional life in politics was off and running.