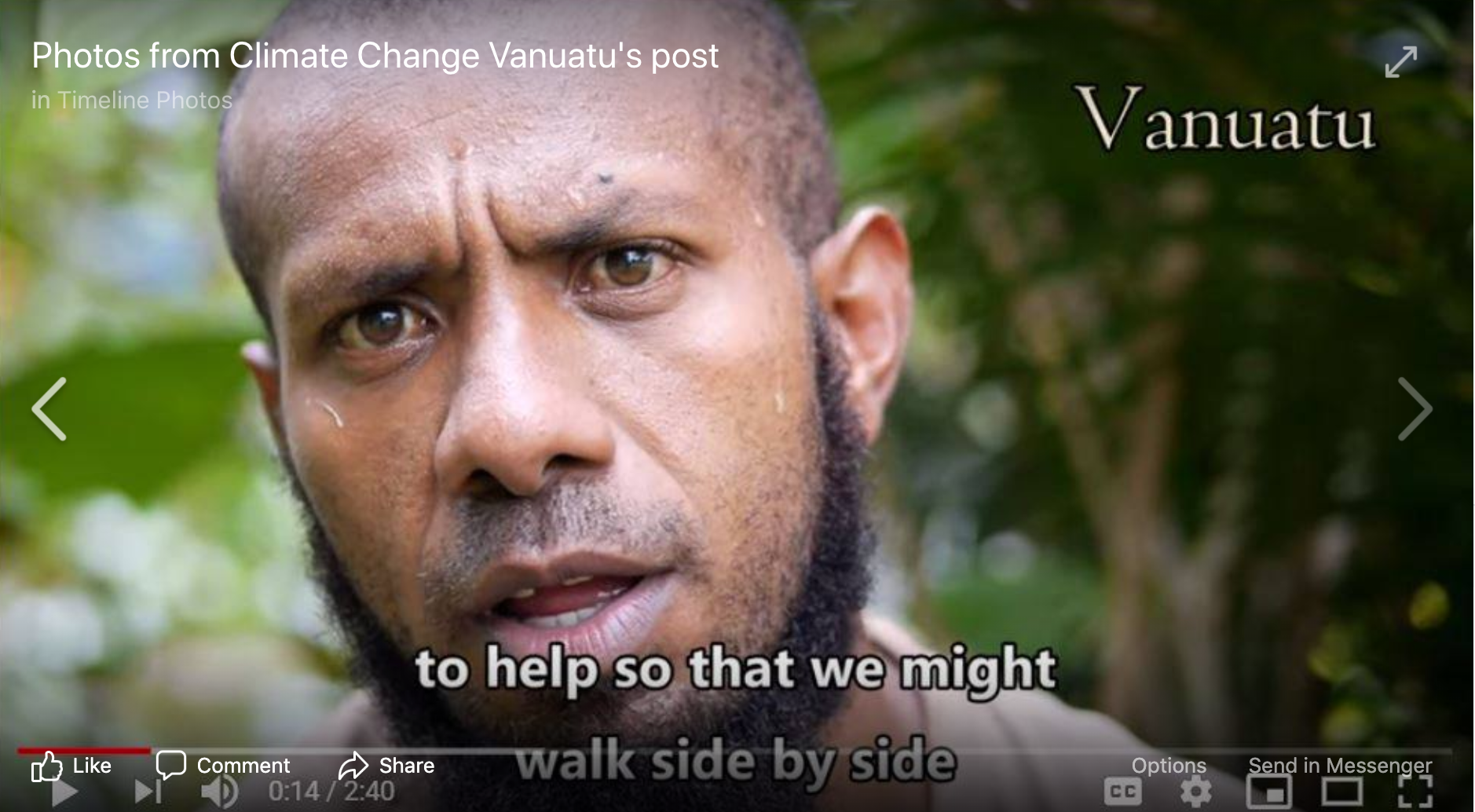 My nephews posted pics of the Anti-Atlas Mountain Range in Morocco, where the fog collectors can condense & collect 20+ liters of water per meter of mesh a day from the fog rolling in, for about 15 towns like Dar Si Hmad, pictured below, where evidently the temps are 46 degrees Centigrade right now. 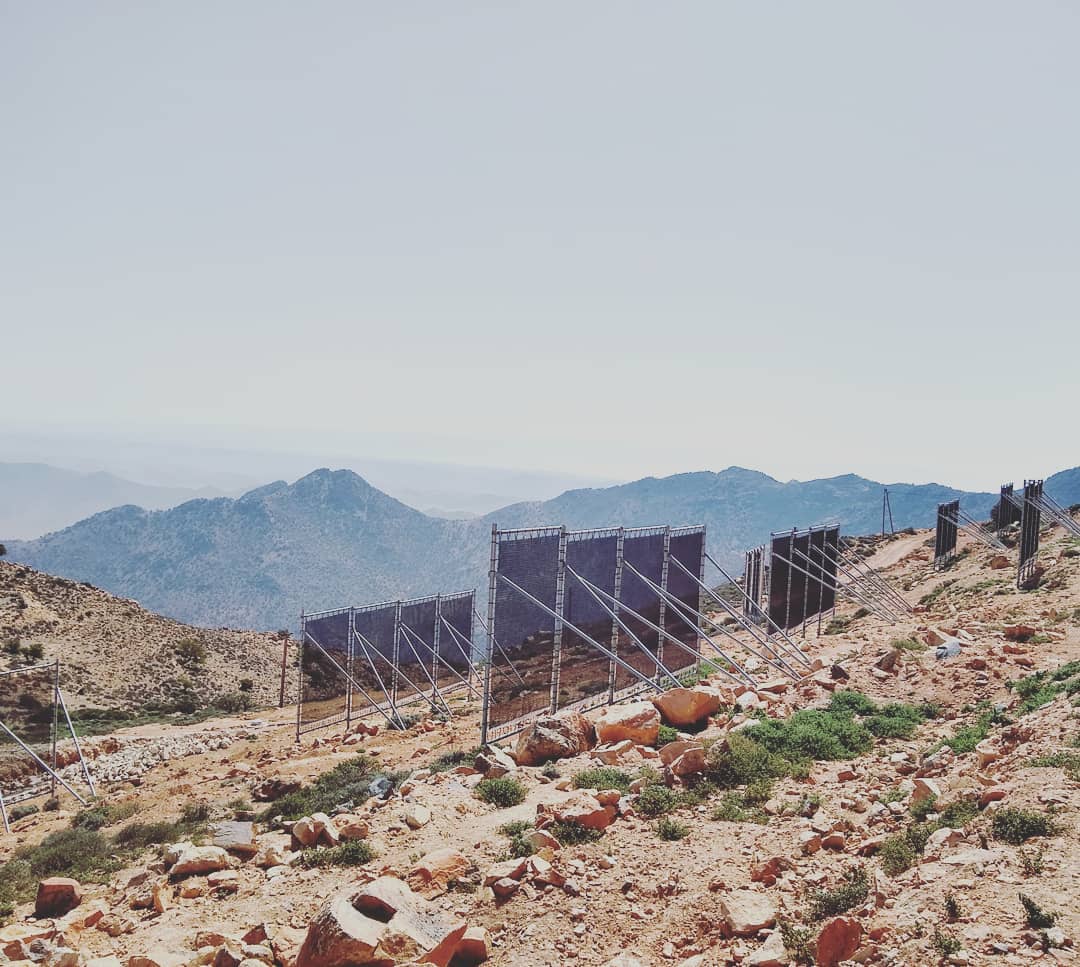 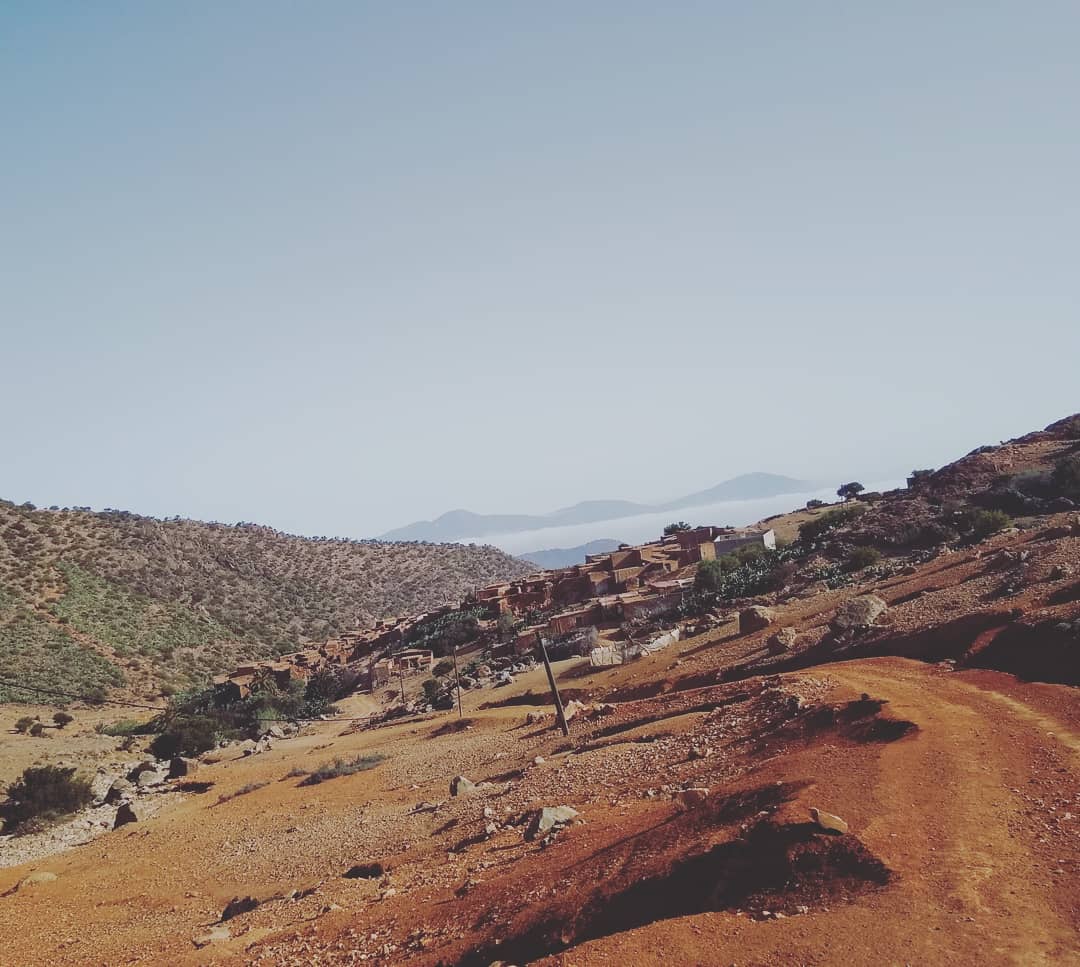 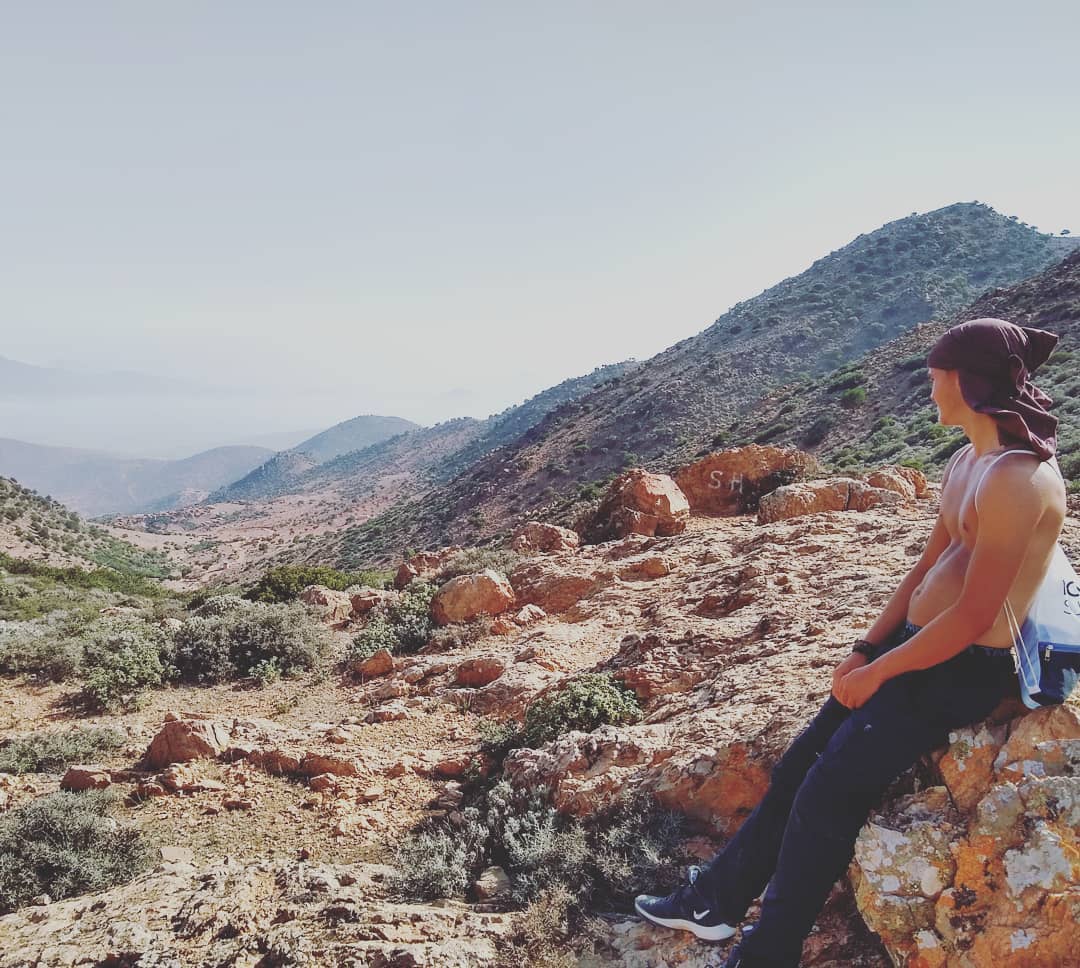 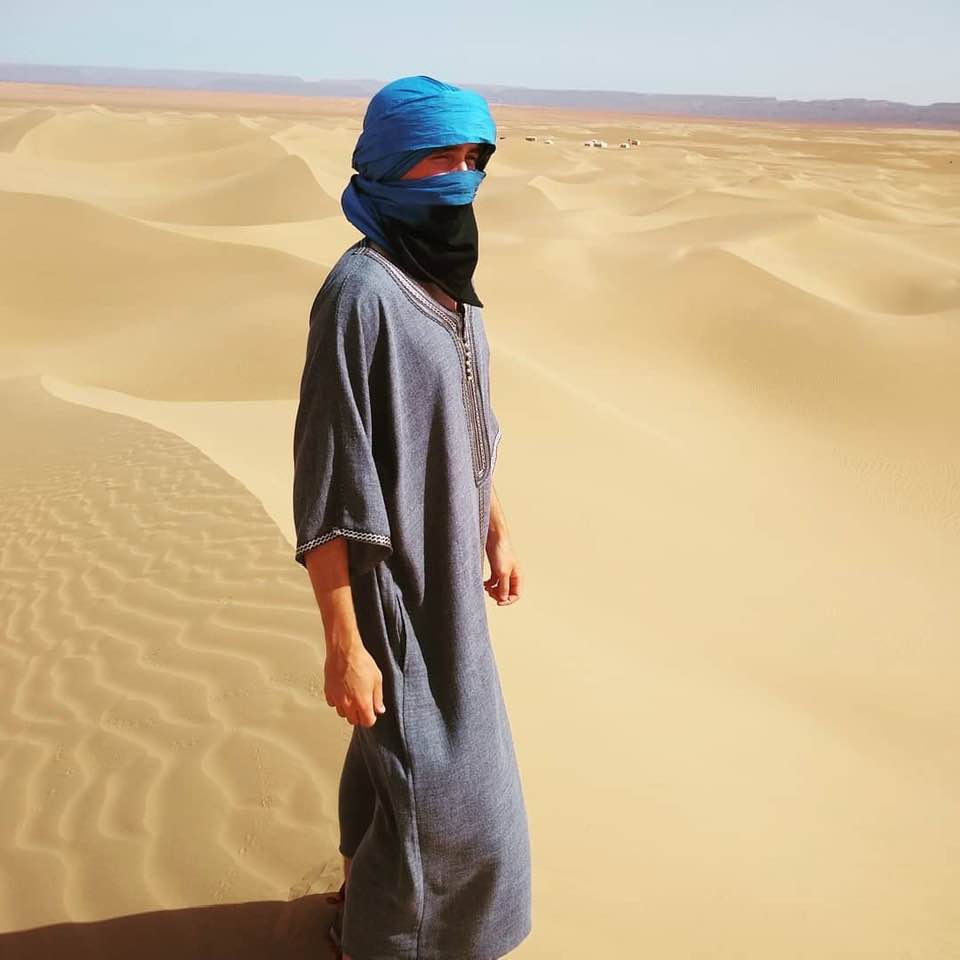 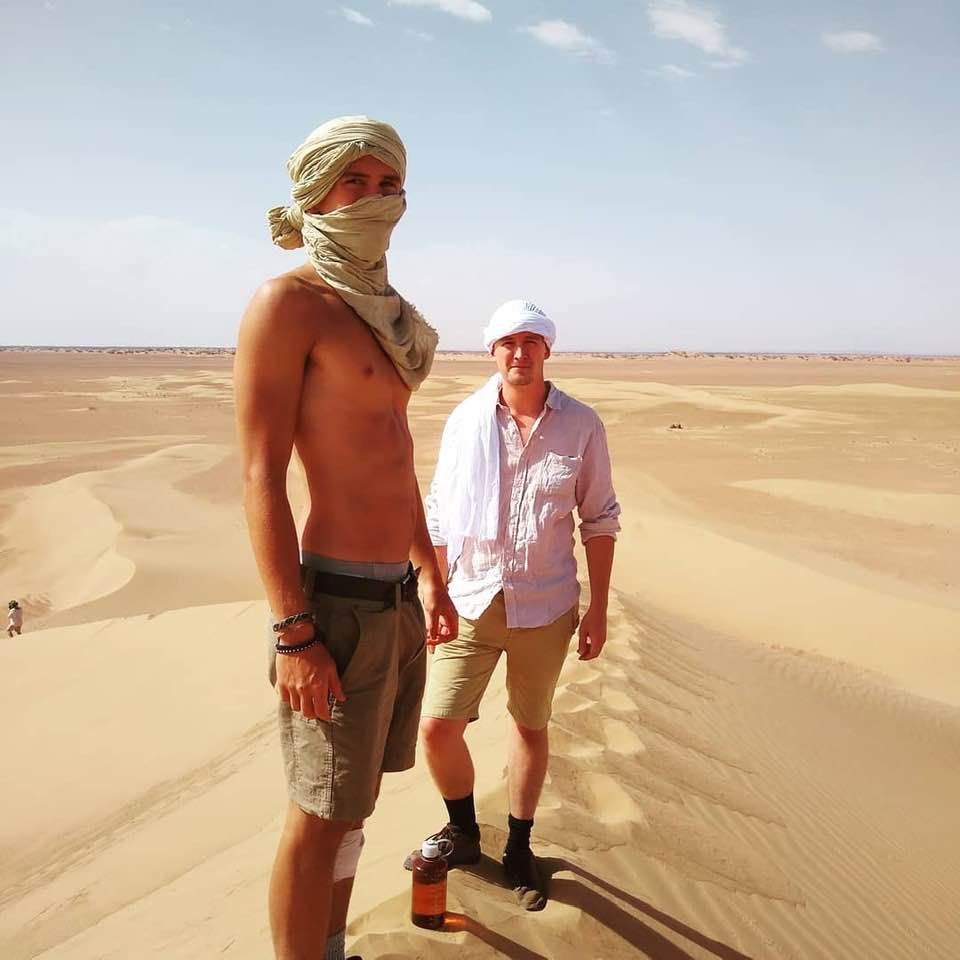 For Island Reach in Vietnam (pre Morocco) go to: A New Expedition 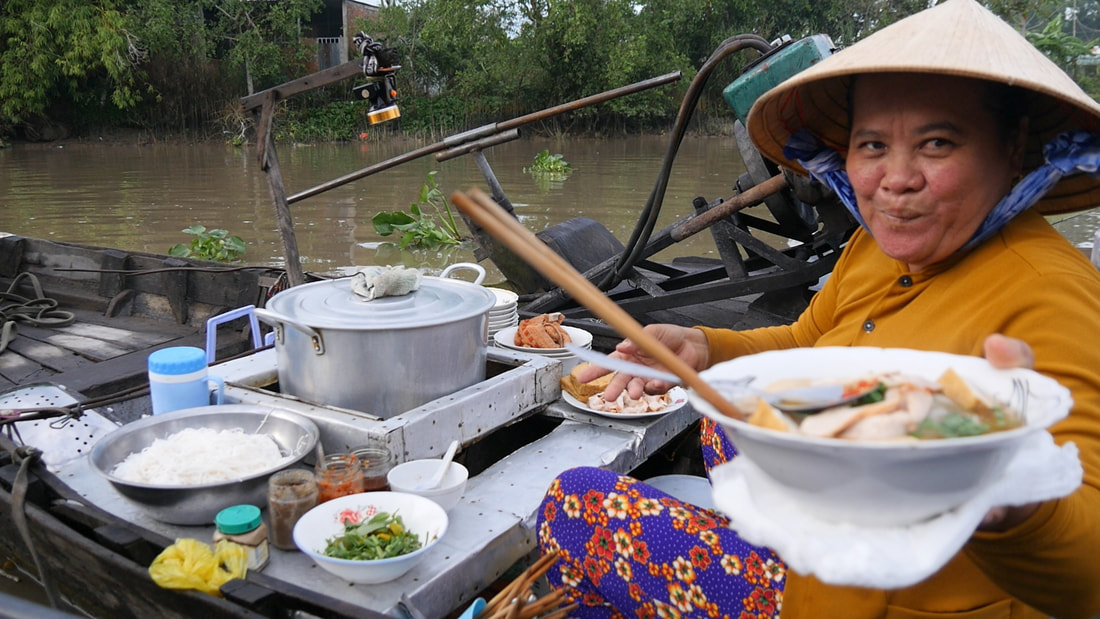 It’s fun to publish idiocy with my fav local writing conference (After attending this yearly for about a decade they are very forgiving!)

Fall submissions are being posted below

WHY I’M A SUPERHERO

One chilly second-Sunday in May, I complained, “Why can’t I hotflash on demand?”

And my daughter said, “you’re not a superhero, Mom.”

Menopausal-Mom! Forgetter of small facts, able to power small (sweaty) cities for minutes at a time!

I flipflop between the guilty miracle of air-conditioning – magical moments when the chemical burn hits and instead of flapping and swearing I punch the AIR button, HIGH, COLD, Ahhhh – or using my ice-block hands to cool nuclear reactors. My thermostat’s off. So, my theory, which is mine, is that I’m simply a metaphor for the larger system. Global change is a menopausal planet.

Think about it! The see-saw’s out of whack, the temp in the terrarium’s varying wildly. The northwest passage opened and Gary Larson’s penguins are about to meet polar bears. Floods of temperamental tears are raising sea-levels, and there’s a whole lotta lost car keys out there. Let’s not even mention the bits that’re drying up or erupting.

So what do we DO for Menopausal-Mom, kids? We help reduce stress. No room for dithering! When sweat rolls off the proverbial brow, it’s DANGER-WILL-ROBINSON! Our path is clear. Drastically reduce emissions, NOW. Shrug off that greenhouse sweater, FAST! Or Menopausal-Mom’s gonna meltdown, and the homefront’ll be even more unlivable.

After all Mother Earth’s done for us, least we can do is be good kids – not bicker about who gets what. We’re all responsible. In fact, Menopausal-Mom needs YOU to be the superhero, ‘cause she’s busy trying to remember where she put that … thing….

So – yeah – imperfect metaphor here! Earth’s a superhero, you’re a superhero, Mom’s a Menopausal Superhero who’s gonna do … something … soon as she remembers what!

And yup! Global Change – Just like Menopause! Let’s hope we can sweat the changes or we’re … kinda done here. 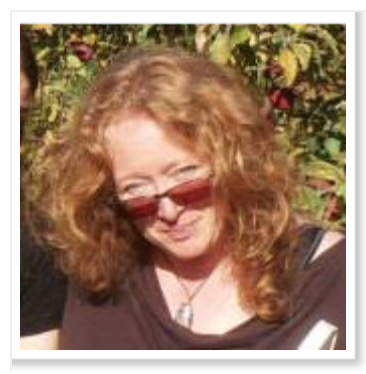 D.K. McCutchen is Senior Lecturer in The UMass College of Natural Sciences, and supports other writing teachers via the UMass Writing Program. She may be the longest-running member of the University Writing Committee. Lack of poetic-DNA led to a tale of low adventure & high science titled THE WHALE ROAD. In a literary attempt to save the world, she’s now writing gender-bender-post-apocalyptic-speculative fiction. She lives on a river with two brilliant daughters and a Kiwi, who isn’t green, but is fuzzy.

Author Spotlight: Editing Is Supposed to Be Fun and Other Wisdom from a Working Writer
By Monica Prince 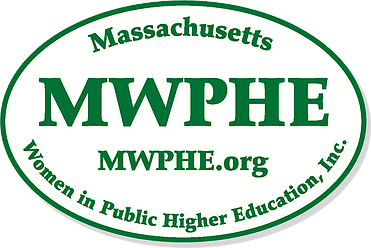 Sugaring has finished for Spring 2018 and that part of our family has headed back down to Fiji and from there sailing back to Vanuatu (with one going in a whole ‘nother direction). Janis Steele (my sister-in-law) of Island Reach, writes: “Our latest video about the creation of a network of Marine Protected Areas in Southwest Bay. The project was supported with a Rapid Ocean Conservation grant from Waitt Foundation. Congrats to the Senewon association for all their great work!”

Last Year in Review: JFD got a bit of buzz after Lady Churchill’s Rosebud Wristlett (#33) — out of Small Beer press in Northampton, MA — published the short story version of the same name. Had a fantastic time with that, as editor Michael Deluca set up a reading panel at READERCON summer of 2015 and got us all reviewed in LOCUS  and  SFRevu (see reviews in the sidebar). I had more fun writing up an interview for him for his blog The Mossy Skull while we were in Boston that August. I was super impressed to walk into a Cambridge bookstore and see LCRW populating the shelves. It all left me with a fabulous impression of small presses, though I gather Small Beer Press has a particularly good reputation for supporting their writers. Our dear family friends, Poet Elizabeth Libby and the late, great nature writer Bill Macleish –who took me to my first Science Journalism conference, admonished me to bring a journal on the Whale Road, and played bagpipes at my wedding– were the first to predict (to me at least) that Small Presses were the publishing choice of the future. Bill was impressed by their kindness and attention to writers, as compared to his later experiences with the big presses. We lost Bill Spring of 2015, and the world is an emptier place for it. But his books remain.

Fall of 2015  I was meant to be reading from JFD for Rough Trade out of Nottingham, but my husband broke his leg playing soccer with our daughter’s school team (a step-n-snap moment). He headed in to surgery the day (hour, moment) I’d have been Skyping with Giselle Lieb in Nottingham (who also has a story in that edition of LCRW). Believe me, I considered reading from Tim’s hospital bedside – it was a great apocalyptic setting! But even with computer in lap, it was not to be, as the timing came down to my reading coinciding with the surgeon walking in to explain what a plateau fracture of the tibia meant (imagine a shattered stick being held together by 9 woodscrews and long metal strapping).  I had to get my priorities straight. I was sad to miss it, but Giselle said they had a great reading, and Tim had a looong recovery of 8+ weeks of no weight bearing whatsoever, and lots of PT after. (2015-2016 had a lot of disasters and losses. Some among family and friends, at at least one orange-colored that we can almost all relate to- worldwide.)

A month to the day later (I was sitting by my dad’s hospital bed this time), I got an email from Clem Cairns at Fish Publishing saying the full JFD mss made the top ten finalist list! (Not that this balanced out what you were going through, Pop, but it was a welcome ‘up’ moment.) He wrote:

“Yo Deb. Great to see your name come up. Delighted for you. It is a sizzling story, bristling with imagination and verve. Splendid. Good luck with all of the sick folk.”

Then, Spring of 2016, JFD moved up for final consideration among the top 5 being considered for publication by Fish (I believe out of Cork University Press?). Sadly, there could be only one. But it was delightful to get that far with this quirky mss.

I believe this collaboration is turning an unusual story that has gotten lots of attention into something even more unusual and compelling (and hopefully publishable).

Oh! And another thing I’m pleased to brag about, is JFD’s Prequel, ICE, which won first place for a Speculative Literature Foundation Grant the year previously, now also has a short-story version that I’m shopping around, and that Mike is illustrating!

With luck and time, we plan to turn both books into graphic novels and add a third. The luck, of course, is necessary for carving out the time.  May all losses and disasters cease and desist for the foreseeable future….(yeah, right). If nothing else, it’s going to be a nerve-wracking next 4 years, ’cause we sure do live in interesting times. Let’s hope the upcoming post inaugural Women’s March in Washington, and the one Tim an the girls and I are attending in Boston, are as peaceful as they are meant to be. As another, much smaller, Tim said (and I misquote): Heaven help us, Everyone. We’re gonna need it. 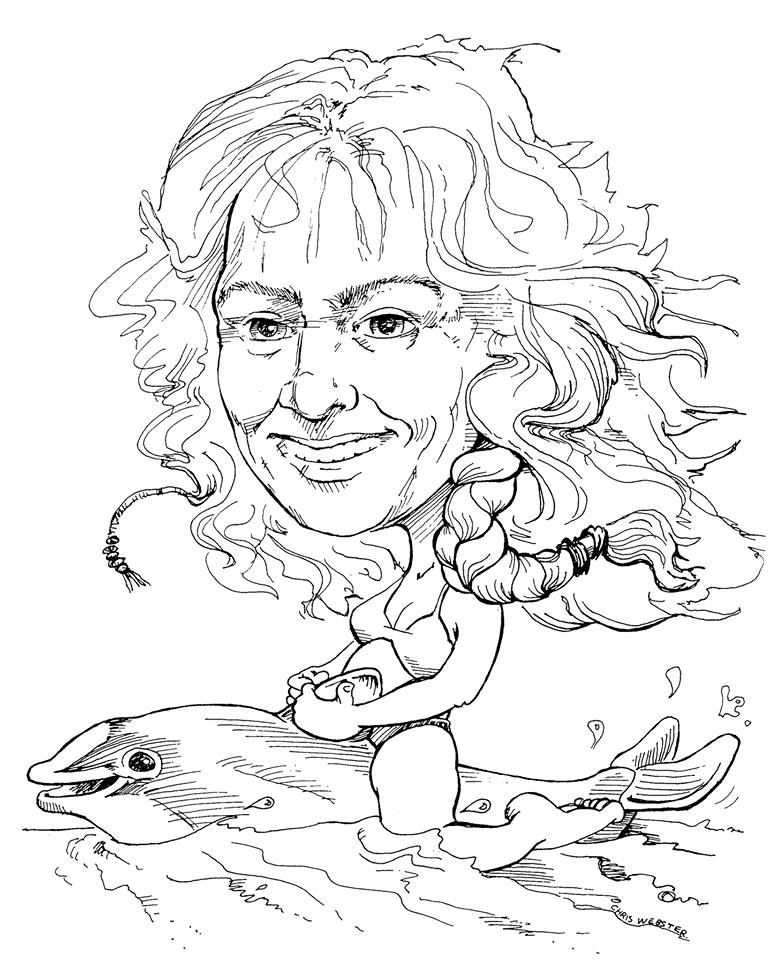 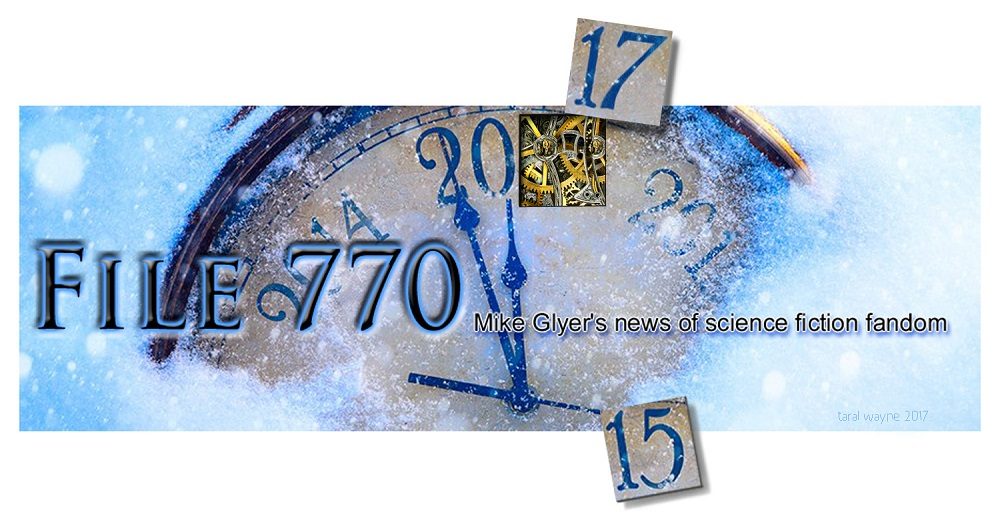 That was good news in a hard year. JELLYFISH DREAMING (JFD) had made first runner up in the past with the Speculative Literature Foundation, and had gotten much kind support from the grant administrators and judges. ICE is the prologue to JFD, which is currently being turned into a graphic novel with illustrator MIKE BUKOWICK. Though ICE will likely come after JFD sequentially. Stay Tuned for the third (or first story, depending on the timeline): THE GREAT WAVE unless I write the last (PLASTIC EATERS) first. I like flipping around in time evidently. 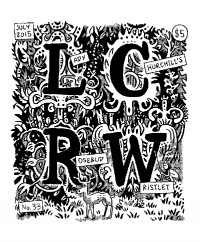 Q: The theme of Lady Churchill’s Rosebud Wristlet Issue 33 is humanity’s relationship with the earth. When you became the issue’s guest editor, did you anticipate you’d get story submissions from the likes of Sofia Samatar and Carmen Maria Machado?

DeLuca: As a matter of fact, I asked them specifically! Along with a handful of others, though those are the only two I solicited whose work appears in the issue. Which is a bit of a cheat, I admit. One of the reasons I love LCRWis how it has been a showcase for new writers. But I felt an imperative to hedge my bets a little, given that it’s a theme issue, and I am not a known brilliant editor like Gavin and Kelly.

Q: LCRW 33 is filled with female perspectives and a strong undercurrent of feminism. What connections do you see between the two and the future in the age of the anthropocene?

END_OF_DOCUMENT_TOKEN_TO_BE_REPLACED

Arms Library Librarian Laurie Wheeler, of Shelburne Falls included “Jellyfish Dreaming” (short story version) from Lady Churchill’s Rosebud Wristlet #33 on slipstream writing on the “theme of humanity’s relationship with the earth” in the time capsule hidden in the new Copper Top. So our speculative fiction will be heading into the future after all! See the story below from the Greenfield Recorder Sept. 17th, 2015.

SHELBURNE FALLS — Sitting on the sidewalk, the new copper dome that is now part of the Arms Library roof sparkled like a crown in the early morning sunlight. And by 8:30 a.m. Thursday, the library’s coronation was complete.

Titan Roofing of Springfield, the company doing the work, hoisted the 300-pound, eight-foot diameter dome with a crane, while bystanders along Bridge Street clapped and cheered. Shelburne Falls songwriter Sarah Pirtle had written a song for the occasion, and she and Edwin Sause serenaded the library and spectators with Native American flute music as the dome rose through the air.

Fundraising for the roof and other repairs to the Pratt Memorial Library Building, which houses the Arms Library, began in 2012, after cracks and leaks were discovered in both the roof and the foundation of the building, which was damaged during Tropical Storm Irene.

The roof project alone was estimated to cost about $405,000. The copper dome is a replica of the original copper dome of that was part of the 101-year-old library building. The library has raised at least $670,000 so far for the building’s renovation. After the roof is finished, Phase 2 of the restoration will include repair of interior damage, preservation of the library’s murals and marble floor, electrical upgrades, window insulation and repair, and air-conditioning. Fundraising for Phase 2 renovations is still in progress.

Besides the dazzling copper dome, the roof now holds a time capsule of village life in 2015. END_OF_DOCUMENT_TOKEN_TO_BE_REPLACED