New York Magazine’s “Spring Fashion Issue” [Table of Contents – February 5, 2018] raises the #MeToo debate to a fever pitch, partly as a result of editorial intention, partly as a result of media finance infrastructure, which intermingles intellectual content and advertising: The articles may be read as criticism of the ads, which may, in turn, be read as examples for the critique; OR, the ads and articles may be read as a complex whole, exemplifying and demonstrating a moment in the history of culture, when virtual (the world of advertising images) and real (the world of intellectual apperception) are confusedly interpenetrated. Either mode of reading points to a question about the role of fashion and social media in relation to lived experience.

The interpenetration becomes obvious from titles of articles explicitly raising questions about “fashion”:

Other articles explore pop culture phenomena, including an exploration of “Instagram influencers”—”ordinary people” whose product buying choices are integrated into brand marketing programs. The confused interpenetration of virtual and real becomes explicit:  “Of course, what the influencers say they are offering, above all else, is ‘authenticity,’ even as they become fully compensated players for the advertising team. ‘Influencers resonate with so many people because of the sense of realness you get from them….'”

This “authenticity” comes with a price—not simply a monetary price paid by the advertiser, but a personal (dare we say spiritual?) price paid by the influencer: Here’s a statement from a November 2016 article in Bloomberg Businessweek: “Constantly,” Floruss said, when I asked him how often he takes pictures of himself. ‘You sell part of your soul. Because no matter what beautiful moment you enjoy in your life, you’re going to want to take a photo and share it. Distinguishing between when is it my life and when am I creating content is a really big burden.’”

Another NYMag article focuses on “Poppy,” a YouTube performance artist: “Is she a robot, a troll, a high-concept art project, a postmodern cultural critique, a cult leader, a clever satirist? Do I get the joke? Is there a joke? What is reality, even? But somehow, Poppy has confused people into paying attention to her. People have willingly gone through the looking glass — or, more accurately, the Black Mirror — in order to understand what this simulacrum of a pop star means. Except now, to further complicate matters, Poppy appears to be trying to become a more traditional kind of famous person….” Poppy told NPR’s Scott Simon in November 2017, “I hope I’m the most special part of [my fans’] day. I want them to feel like I’m taking them to a part of their imagination they’ve never experienced. Poppy’s world is a magical place, and it’s the most free part of the entire universe.”

The references to “through the looking glass” and “Black Mirror” neatly implicate the experience of reading the magazine itself. On one hand, this makes the “fashion issue” a bold editorial gambit, tossing caution to the winds and challenging the paradigm of high (read exotic, transgressive) fashion—indeed, challenging the notion of “fashion” itself. On the other hand, this gambit produces the very “looking glass, Black Mirror” effect—readers are buffeted by analyses targeting their experience as viewers. In this sense, the editors are playing with a variation of the question posed by the title to the article about Poppy: “Like Warhol But for 2018. Is Poppy enacting a meta-commentary on fame in the YouTube era? Or does she simply want to be famous?”

Startling and amusing results happen in a media format subject to algorithmic ad placement. For example, an ad appeared on my screen last year as I read an article about sex robots in The Guardian July 2017: Plunked into the author’s serious questioning whether sex robots “could amplify objectification of women” because they are “based on representations garnered from pornography” was an ad for women’s clothing from Rosewe, whose website says, “Our target audience is the fashion conscious 18-35 women’s wear market. We aim to be exciting and innovative, offering our customers the fashion they want, when they want. To stay in touch with the ever changing trends within our market we have developed a dynamic and very responsive organisation.” I took a screenshot: 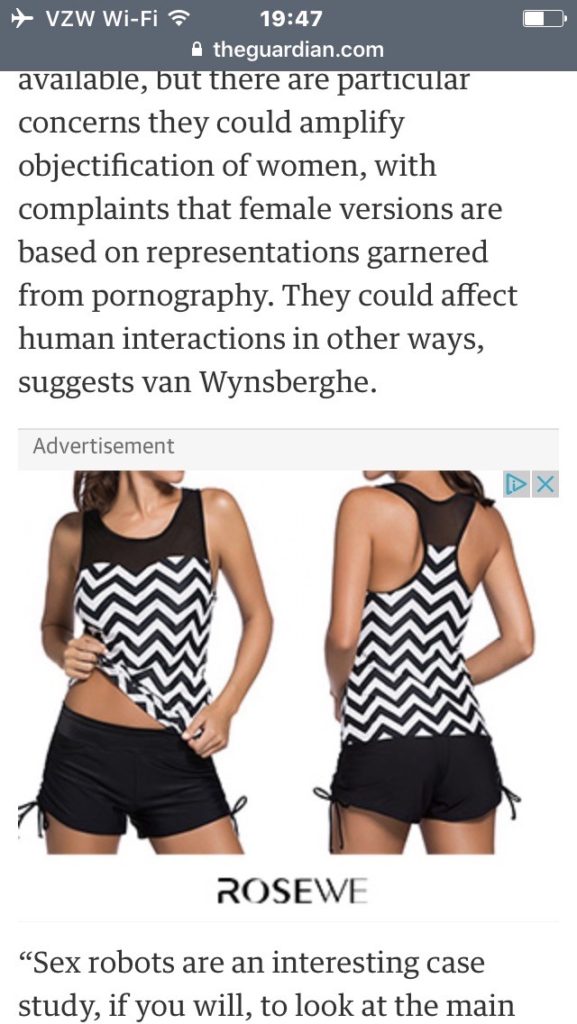 I trust you see the quasi-pornographic aspects of the image. My point, however,  goes not to the imagery as such, but to the algorithmic automaticity of its appearance in the midst of a critique of such images! Looking glass and Black Mirror, indeed!

In 1899, William James addressed the topic of “Apperception,” in Chapter 14 of his Talks to Teachers: “The gist of the matter is this: Every impression that comes in from without, be it a sentence which we hear, an object of vision, or an effluvium which assails our nose, no sooner enters our consciousness than it is drafted off in some determinate direction or other, making connection with the other materials already there, and finally producing what we call our reaction. The particular connections it strikes into are determined by our past experiences and the ‘associations’ of the present sort of impression with them.”  James was at pains to demystify the process of apperception, but also to “confirm in [teachers] a healthy sense of the importance of [their] mission, to feel how exclusively dependent upon [their] present ministrations in the way of imparting conceptions the pupil’s future life is probably bound to be.”

What are the implications of James’ insight and concern today, in a time when the educational model of teachers and pupils has been superseded by social media and corporate advertising, in which the overwhelming majority of “impressions…from without” are simulations of reality, produced in an effort to maximize profit for the impression producers? One suggestive answer to this question comes from Jean Baudrillard, Simulacra and Simulations (1988): “Simulation … is the generation by models of a real without origin or reality: a hyperreal. The territory no longer precedes the map, nor survives it. Henceforth, it is the map that precedes the territory – … It is the real, and not the map, whose vestiges subsist here and there, in the deserts which are no longer those of the Empire, but our own. The desert of the real itself.”

Not to put too fine a point on it:  It appears that advanced (read: hyper-capitalized) society has come to the point where an insufficient sense of “realness” drives masses of people to seek to become commodities—going beyond the commodification of persons and relations implicit in a capitalist economy. This drive toward a virtual realness fuels both sides of the pop culture—”fans” and performers. Warhol’s (in)famous equation of business and art marks an historical moment when creative acts are not creative unless—and to the extent that—they occur as commodities. And individuals become “real” only to the extent they appear as “fans” of a “famous” other—imitators of one talked about.

On 16 February 2018, Jenn Abelson and Sacha Pfeiffer, of the Boston Globe’s famed “Spotlight” team, presented the results of their investigation into the “fashion industry”—“Modeling’s glamour hides web of abuse”  (Wow! I beat Spotlight by 6 days… :-). They present excerpts from extensive interviews with more than 50 models. One sentence in the article particularly captures the “looking glass” and “simulacra” phenomena: “the very nature of models’ work involves the marketing of seduction. At times, they are asked to dramatize sexual behavior they may not yet have experienced in real life.”