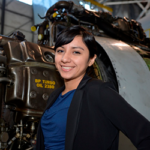 Yari Golden-Castaño is a systems engineer at MIT Lincoln Laboratory working on hardware and software development for optical communication systems. She is also one of 100 candidates from around the world for the Mars One Project – the first human settlement of Mars.

Yari graduated from Smith College with a bachelor’s degree of science in engineering and a minor in physics. Upon graduation, Yari joined MIT Lincoln Laboratory as a data analyst focusing on research, data evaluation, and algorithm development in the Weather Sensing and Air Traffic Control Systems Group. She has collaborated with MIT’s International Center for Air Transportation to understand the environmental effects on aviation. Most recent, in the engineering department, Yari has contributed to the design of an optical module for an expandable nano-satellite, she worked with a software team on software development and controls for a laser communication, and she is currently working as a systems engineer on the assembly, integration and testing for a laser communication system.

In 2013, Yari applied to the Mars One – Human Settlement of Mars Project. Yari has advanced through the astronaut medical exam and remote interview. Now, she prepares for the physical and psychological challenges of the remaining selection rounds to be trained full-time for a future launch and permanent settlement on Mars.

Yari recruits women and minorities for MITLL employment and organizes STEAM outreach events for students k-12 and workshops introducing engineering to girls. Yari’s astronaut candidacy brings a wider audience for promoting space exploration and STEAM education. In November 2016, Yari received the 30 Under 30 Most Influential Latinos in the Community Award from El Mundo Boston and in 2017-18, Yari’s story was highlighted in Honda’s campaign “Greatness Within Reach”.