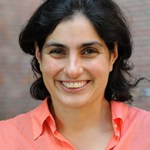 Professor Nergis Mavalvala joined the Physics faculty at MIT in January 2002. Before that, she was a postdoctoral associate and then a research scientist at Caltech, working on the Laser Interferometric Gravitational Wave Observatory (LIGO). She has been involved with LIGO since her early years in graduate school at MIT and her primary research has been in instrument development for interferometric gravitational-wave detectors. Professor Mavalvala received a Ph.D. in Physics from MIT in 1997, and a B.A. in Physics and Astronomy from Wellesley College in 1990. She was appointed Associate Department Head of Physics, effective February 1, 2015.