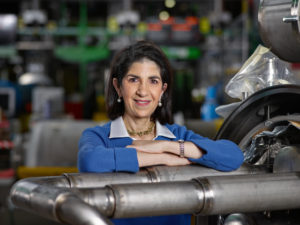 Dr. Gianotti has worked on several CERN experiments, being involved in detector R&D and construction, software development and data analysis. From March 2009 to February 2013 she held the elected position of the project leader (”Spokesperson”) of the ATLAS experiment. The ATLAS Collaboration consists of 3000 physicists from some 38 countries. On 4 July 2012, she presented the ATLAS results on the search for the Higgs boson in a historic seminar at CERN. This event marked the announcement of the discovery of the Higgs boson by the ATLAS and CMS experiments.

She received honorary doctoral degrees from the University of Uppsala, the Ecole Polytechnique Fédérale de Lausanne, McGill University (Montreal), University of Oslo, University of Edinburgh, University of Roma Tor Vergata, University of Chicago and University of Naples. Dr. Gianotti was awarded the honour of “Cavaliere di Gran Croce dell’ordine al merito della Repubblica” by the Italian President. She received the Special breakthrough Prize in Fundamental Physics (2013), the Enrico Fermi Prize of the Italian Physical Society (2013), the Medal of Honour of the Niels Bohr Institute (Copenhagen, 2013), and the Wilhelm Exner Medal (Vienna, 2017). She was included among the “Top 100 most inspirational women” by The Guardian newspaper (UK, 2011), ranked 5th in Time magazine’s Personality of the Year (USA, 2012), included among the “Top 100 most influential women” by Forbes magazine (USA, 2013 and 2017) and considered among the “Leading Global Thinkers of 2013” by Foreign Policy magazine (USA, 2013).

On 1st January 2016, she has become Director-General of CERN.