A recent case involving an Oklahoma State pitcher and the NCAA has once again demonstrated the problems with NCAA rules and how they hurt more than help student athletes. The case involves Any Oliver, who was the second round pick of the Detroit Tigers in the most recent Major League Baseball amateur draft. Oliver was a highly touted prospect coming out of high school, and was actually selected by the Minnesota Twins in the 2006 draft. Oliver hired Tim Baretta of Icon Sports Group to help with contract negotiations at the time he was selected by the Twins. Baretta was present during the negotiation with the team, which turned out to be in violation of NCAA Bylaw 12.3.2.1 that states “ a lawyer may not be present during discussions between a student-athlete and a professional team or have any direct contact (in person, by telephone or by mail) with a professional sports organization on behalf of a student-athlete.” Oliver decided not to sign with the Twins and decided to pitch for Oklahoma State instead. During his time there, Oliver decided to change agents and sign with the Boras Corporation. Subsequently, angered by the change in agency, Icon disclosed their relationship with Oliver to the NCAA. As a result, Oliver was suspended for a year (usual suspension is to take away all eligibility), which was eventually reduced to 70% of one season. Oliver then went on to challenge the decision in the state court of Ohio where he was granted injunctive relief and the suspension was nullified. The state court of Ohio determined that the NCAA bylaw was arbitrary and capricious and that it limits the players’ ability to effectively negotiate a contract. This was a big ruling against the NCAA, however they said that they would stand by the bylaw and that it still applied to student-athletes in the other 49 states. Oliver continued with a case that sued the NCAA for damages, but the NCAA settled out of court for $750,000. As part of the settlement, the NCAA bylaw would continue to be upheld in all 50 states. Oliver agreed to the settlement because the NCAA said that they would just keep appealing the case and tie it up in courts for years. To me, this is just another case of the NCAA bullying student-athletes and using rules that do more harm than good. There is no way for the NCAA to police all student-athletes who may be negotiating contracts as to whether they have had a lawyer present or not. The only way the NCAA finds out is if someone turns the player in, as Icon Sports Group did. Eighteen-year-old kids and their parents cannot be expected to negotiate contracts with professional teams. Also, it is foreseeable that more athletes will change their mind like Oliver did and decide to attend school as opposed to turning pro. Again, someone who is only eighteen does not necessarily know exactly what they want to do with their lives. Having a lawyer present to protect a student-athlete should not mean that the athlete loses his or her amateur status. The NCAA needs to take a step-back and look at how they can better help the athlete instead of sticking to rules that are outdated. The bylaw is ridiculous and cannot be policed. Amateur status should only be taken away once an athlete actually turns professional. The NCAA has to consider the student-athlete. 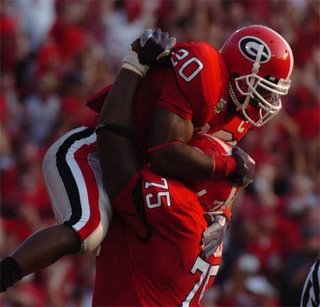 So first off, this is my first post of the new term, so I’d like to welcome anyone and everyone who has not yet visited the blog.

Now to the topic at hand. I was driving between Boston and Amherst, MA at about 6AM (Don’t ask why) and of course I have nothing better to do than listen to Mike and Mike on ESPN radio. I didn’t really know the results of college football that weekend, other than the fact that my undergrad Alma Mater the University of Tennessee had again lost…I’m thinking it’s gonna be a long season, but no comments on that. I then heard about the LSU-Georgia game, which LSU apparently won in a killer finish, which is great because it sets up an amazing matchup this weekend between LSU and Florida. Now normally I couldn’t say anything nice about LSU or UGA because I grew up to…”strongly dislike” anyone but Tennessee, and maybe Boise State because how can you not like them. But in this case I think UGA got the bad end of a call that might have altered their game. In my car, I listen to a 2-minute Mike Golic rant about the celebration rule in college football which is what I am thinking about today.

Now it really doesn’t matter what kind of celebration it was, and in this case it was nothing more than the guys on the field running and jumping up with the receiver who caught the ball (Not the entire team celebration that Georgia pulled last year againast Florida, which was more taunting than celebrating). The point of this whole thing is WHY IN THE WORLD CAN COLLEGE FOOTBALL PLAYERS NOT CELEBRATE? These guys are killing each other out there and for them to celebrate during a tight game that means sooo much should be allowed without question. What is the whole point of the celebration penalty? It is an unsportsmanlike conduct issue and the fact is that CELEBRATING IS NOT UNSPORTSMANLIKE. On the contrary, the most memorable times in sport are celebrations of the big moments which mean something. The argument I hear is that celebrating is taunting…Are you Kidding Me? Taunting is absolutely different. It is targeted at the other team or player, and celebrations are not.  I saw a receiver make an amazing catch, get hugged by his teammates and then point up to the fans as if to say, “Get Up and Get Loud”. At no point did the player even look at the other team. I understand taunting as a penalty, but give me a break, celebrating isn’t even the saem thing. Next thing you know the NCAA will be saying you can’t make a play over 20 yards because it might hurt the feelings of the other team.

At this point the NCAA needs to take this penalty out of college football all together or a game that might make or break national championships hopes could be altered by college kids celebrating a score.