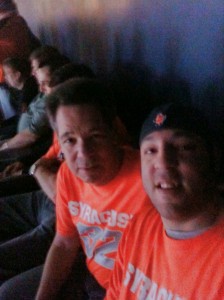 Popsnson at Cuse vs Gonzaga 2nd Round in Buffalo

I grew up Syracuse Orangemen (now Orange) fan since I was 7yrs old. My first introduction to Syracuse was watching the 1987 National Championship game against Indiana.  From that point forward I bled orange and remember most big games since that time.  With my fandom in full force I dragged my dad into being part of my misery.  I also converted him into a Broncos fan the same year and signed him up for even more suffering that would now last from September all way through March.  Yes there is a theme of Orange and Blue for my favorite teams.

It was the spring of 1996 when I got accepted to Umass and that March both Syracuse and Umass were in the Final Four.  I was rooting for both teams but didn’t know who I would support in the title game if I had to pick.  Unfortunately Umass lost to Kentucky and the Cuse wound up losing a close game to a Kentucky team that had 7 future NBA players on it (Can you name all the players without looking them up?).   Than my freshmen year at Umass was the last time the Minutemen made the tournament and lost to a Larry Hughes St.Louis team.  Since then there hasn’t been much Umass basketball to root for come March and I’ve remained a huge Syracuse fan through the years.

With that being said this past season by the Orange was a huge treat for me to follow and dream of another Final Four run. Knowing that it could be a special season I thought it would be the perfect time for my pops and I to see our first ever NCAA Tournament game.  So the wheels started spinning on getting myself from San Francisco to Buffalo where the Cuse was destined to be for their 1st and 2nd round games (I was solely basing this by Joe Lunardi’s projectios).

Dad was a bit skeptical on the trip but I told him we had to do it and when else would the Cuse be a #1 seed.  So off we went, I bought our tickets right after the Cuse became ranked #1, reserved our hotel and booked myself a flight.  To help track our journey to Buffalo I decided to create a blog and report on the tourney and of course our sampling of Buffalo Wings or as they are called in Buffalo just wings.  If you want a father and son first hand look at the tourney and our fun experiences in Buffalo check out www.popsnson.com

Maybe next year Umass will finally get back in the tournament especially if it’s expanded to 96 teams, Go Umass!!