Whether we like or not, indigenous people love to drink Coke. The Coca-Cola Company has been in Mexico for a while now, and now has everyone drinking Coke, in rural as well as urban areas. According to Embotelladoras Arca, “Mexico is the number one consumer of Coca-Cola in the world, with an average of 225 liters per person.” This is the reality in Mexico and many other parts of the world. If the world drinks Coke, why expect that indigenous people not drink coke? Is it because we want them to live like native people, and not be contaminated by this “imperialist” drink? Personally, I found the recent Coca-Cola video[1] in which a group of young white people (from who knows where) comes to offer peace and love to a Tontontepec Mixe community during the Christmas holidays (using Coca-Cola as medium for this peace) disturbing (more in Daniel Suslak’s blog[2]). The ad encourages a common practice: during the Christmas holidays people will drink Coca-Cola, and lots of it—some people will even mix it with some brandy! I find it interesting what Suslak has gathered by communicating with people from Totontepec: they do not think this video is that bad. I am also very interested the reactions of other people to this video. Many are angry, and they should be, since the Coca-Cola Company is appalling—first because of the health issue, and now with their racist video. Coca-Cola probably paid some of the participants, and others thought that it would be fun to be in a video. This is understandable if they were told that the ad would promote their culture and language.

It is awful, but Coca-Cola has gained prestige among indigenous people of Mexico. I work in the Chatino region (south of Oaxaca City). I will offer two scenarios to explain how important Coke is in many communities in Mexico. Case 1: One time, I arrived in a village when they were holding the end-of-school celebration. Usually they have a table where all the important people sit. At this table they had about ten: school principals, members of the local government, the village doctor, etc. Each person at the special table had not only one Coke bottle, but two! The organizers of this event were teachers, who are known for their radicalism and their position against capitalism, but even they chose to serve Coke to the important people of the village. The rest of the attendees had to go to the store and buy their own Coke, but still almost the whole village had a Coke to celebrate the clausura of the school. Case two: It is a custom to give a soda to the guests at a party in Quiahije. If you do not give them a soda, you are not following the customary rules. One time I told my mother to not give sodas to the guests; instead, we made a hibiscus drink. My mother agreed, but my uncle went and got Coca-Cola to give to the guests. He said, “we do not want people to talk bad about us, they are going to think that we have no money. If you do not want to buy the soda, I am going to buy it with my own money.” I had no choice but to give him money for the Coke.

Often, we do not know how Coca-Cola does business; we only know that Coke tastes good! Many people do not know that Coca-Cola is taking control of the natural resources of Mexico, such as natural springs. And yes, Coca-Cola is a terrible company, seizing control of resources and selling an unhealthy product for profit. Of course, Coca-Cola is not the only company that has made this type of promotion. There are many other companies, such as the Sol and Corona beer companies. Sol and Corona have territorial dispute. For example, Corona sponsors the important Muxe (transvestites) event in Juchitán, Oaxaca Mexico. I have been told that Corona will bring trucks of Corona beer for the event, and will not allow another company to sell their beer.

Is Coca-Cola promoting indigenous languages? I hate to say it, but the company is more successful at connecting with indigenous people than any other governmental or non-governmental institution in Mexico. Of course they have more resources than other organizations, and they are driven profits. The Indigenous Language Institute, for example, made advertisements (showing that indigenous languages are languages and dialects) for movie theaters in Mexico that cost them a huge amount of money. However, these advertisements were not very successful. I am not defending Coca-Cola, but only pointing out that the Coca-Cola advertisement will elicit many reactions. Some Mexicans will wonder, in a more or less explicitly racist way, “How did these indigenous people get to be in a Coca-Cola advertisement?” Other people will be jealous, and wish they could be in a coke video promotion. This is not the first time that something like this has being done. For example, at the airport in Chiapas you can see the following photo. Coca-Cola has used indigenous people in their advertisements for a while now. 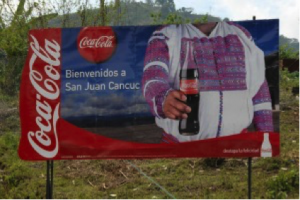 I hope to hear more about the meeting in Tontontep. I would like to learn if the community of Tontontepec is considering boycotting Coca-Cola for making this video. Some Mexican citizens are looking into suing Coca-cola company for the video. Abelardo Ávila, a researcher at the National Institute of Medical Sciences, and Salvador Zubirán, a nutritionist, reported in La Jornada that the metabolism damage that Coke has caused to indigenous people is six-times higher than in other populations. Most indigenous people have suffered malnutrition, which makes them extremely sensitive to junk food and sweet drinks. These two experts said that the prevalence of diabetes in indigenous communities is increasing due to poor nutrition (La Jornada 2015). Because the consumption of Coke is deeply tied to an ongoing public health issue, the Mexican government is also responsible for the problems caused by Coke. But what can we expect when Coca-Cola is its accomplice?

Finally, I can see why some people are upset by the advertisement. I am too, but the reality is that “this fizzy drink is considered an essential part of the Mexican people’s diet and can be found even where there is no drinking water” (Embotelladoras Arca). Given its level of involvement in the lives of indigenous people, Coca-Cola has an obligation to right the wrongs it has committed. The Coca-Cola Company should be sued for many other reasons. We should demand that Coca-Cola stop privatizing water recourses in Mexico, and that they pay for the sickness, such as diabetes, that they have caused in indigenous communities, and that they clean up all the garbage that they have produced through their products.