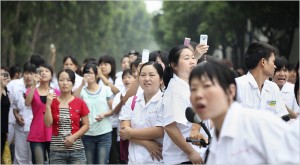 Employees of Honda Lock in Zhongshan, China, took photos with their cellphones during a walkout last week. Many images were posted to the Internet. June 16, 2010 NYT

[youtube]http://www.youtube.com/watch?v=U1YGrgYdUeE&feature=related[/youtube] Foxconn riot exposes dark side of tech glitter http://www.youtube.com/watch?v=U1YGrgYdUeE&feature=related  ReutersVideo  Sept. 25 – An electronics factory in China run by a major Apple supplier reopens after being rocked by riots, a reminder of the human cost behind glossy technology gadgets.

[youtube]http://www.youtube.com/watch?v=vNGaZdkI_Po&NR=1&feature=endscreen[/youtube] Sep 25, 2012 by NMAWorldEdition   Next Media Animation A dispute at a Chinese Foxconn factory that makes part of the iPhone 5 reportedly resulted in a riot involving nearly 2,000 employees. The factory was shut down as of Monday morning. According to inside sources, the riot started as fight between a violent security guard and an employee. Videos circulating around the web showed thousands of employees chanting, breaking glass and fighting with guards. It took nearly 5,000 policemen to quell the rioting. The factory, located in the northern Chinese province of Taiyuan, makes the back plate of the iPhone 5. Apple fanboys probably care more about how incidents like these affect the availability of iPhone 5s than they care about the welfare of Foxconn’s Chinese workers who make parts of the iPhone 5.

Germany: Protesters mob Apple against exploitation  RuptlyTV  Published on May 16, 2014