This assignment has two parts:  1.)  It introduces two contrasting perspectives on the role of government in promoting the common good:  neoliberalism vs. the New Deal.  The conflict between these two ideologies helps to understand why the dominant U.S. power structure abstains from regulating the entertainment industries for the common good.   2.)   Envision directions for reshaping an entertainment industry based on principles of economic democracy.

NOTE: Submit your response notes to instructor as a Google doc via email: jsaxe@comm.umass.edu 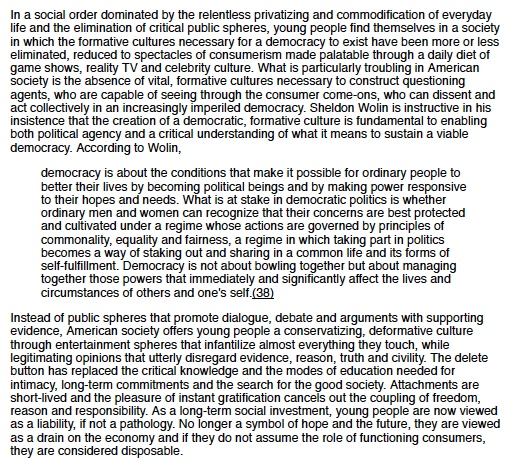 The fundamental bias of what gets labeled “the news” endorses and reinforces a capitalist worldview, favoring the interests of the upper-income classes, and the so-called “free market” from which they profit, own, and control.

Signified by the scarce utterance of the word “capitalism,” this unquestioned commonsense is completely normalized as the way it is:  “always has been, will be.”

The victory of this cognitive battle is seen in the demonization of terms and concepts that favor the interests of everyday working people to ensure the provision of basic human needs:  food, housing, healthcare, education, transportation, culture, community.

The absence of  “news” and a wider public discourse critical of capitalism and sympathetic to the needs of everyday people robs the public of cognitive resources – language, history, concepts – that suggest the benefits of and possibilities for building grassroots movements for resistance based on a vision of a transformed, positive* future that seeks to safeguard the common good, the collective interests of all.

* vs. dystopian: “it’s easier for Americans to imagine the end of the world than the end of capitalism”

Public derives opinions about crime from the “news”

77 percent of the public say they form their opinions about social issues like crime from what they read and watch in the news.

Despite a 33 percent drop in juvenile crime since 1993, two-thirds of the public still believe crime is rising.

From 1990 -1998,the national crime rate dropped by 20 percent, but news coverage of crime increased by 83 percent.

The disparity between coverage of youth & their real-life conditions has led to the criminalization of an entire generation.

In California, two-thirds of adults are white, while three-ﬁfths of youth are of color.  Such demographics leads to a fear among white adults that provides a backdrop for criminalizing news coverage of youth of all races — “white hot fear”

For each story on Youth & Poverty, There Were 11 Stories on Youth & Crime  Though youth poverty continues to rise & youth crime & victimization continue to fall, incidents of crime received more attention than conditions of youth poverty.

Stories about pets & animals appeared more than 4x as often as stories about youth poverty – 55:12

Fewer Than 5 Percent of News Stories About Youth Mentioned Poverty  Today, 20 percent of youth live at or below poverty level, but youth poverty is not a focus of news coverage.  As unemployment for teens skyrockets to more than 4x the adult rate, child poverty remains one of news media’s most under-covered issues.

Stories About Youth and Crime Almost Never Quoted Youth, Especially The Voices of Youth Advocates Were Almost Completely Missing from

News Stories About Youth  In almost 70 % of the news stories, no youth advocates or public defenders were quoted.

In Stories About Youth, Law Enforcement and Politicians Were Quoted More Often Than Any Other Sources Police, prosecutors, and politicians were quoted in approximately half(49.8 percent) of the stories about youth. Public defenders for youth were not quoted in any of the stories.

LACK OF CONTEXT:  More Than Half of News Stories About Youth Failed to Examine Solutions or Causes for the Issues and Problems 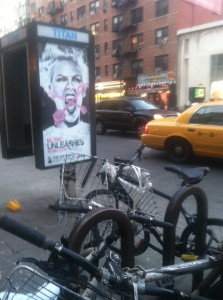 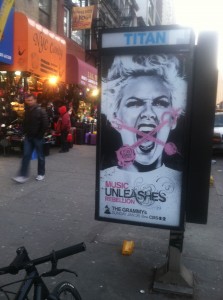 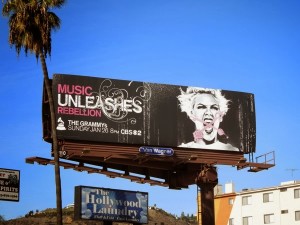 “Music Unleashes Rebellion Pink Grammys 2014 billboard. For another approach to advertising a music awards broadcast, take a look at this special glittering … billboards were all over L.A. at the start of the New Year, photographed from January 2 to January 14, 2014.”
http://www.dailybillboardblog.com/2014/01/the-grammys-2014-music-unleashes.html

People pissing on the stairs, you know they just don’t care

Got no money to move out, I guess I got no choice

Rats in the front room, roaches in the back

Junkies in the alley with the baseball bat

I tried to get away, but I couldn’t get far

Cause a man with a tow-truck repossessed my car

Don’t push me cause I’m close to the edge

I’m trying not to lose my head, ah huh-huh-huh

Standing on the front stoop, hangin’ out the window

Watching all the cars go by, roaring as the breezes blow

Crazy lady livin’ in a bag

Eating out of garbage pails, used to be a fag-hag

Said she danced the tango, skipped the light fandango

The Zircon Princess seemed to lost her senses

Down at the peepshow, watching all the creeps

So she can tell the stories to the girls back home

She went to the city and got social security

She had to get a pimp, she couldn’t make it on her own

My brother’s doing bad on my mother’s TV

She says: “You watch it too much, it’s just not healthy!”

“All My Children” in the daytime, “Dallas” at night

Can’t even see the game or the Sugar Ray fight

The bill collectors they ring my phone

And scare my wife when I’m not home

Got a bum education, double-digit inflation

I can’t take the train to the job, there’s a strike at the station

Neon King Kong standin’ on my back

Can’t stop to turn around, broke my sacrophiliac

Sometimes I think I’m going insane, I swear I might hijack a plane

My son said: “Daddy I don’t wonna go to school

Cause the teacher’s a jerk!”, he must think I’m a fool

And all the kids smoke reefer, I think it’d be cheaper

If I just got a job, learned to be a street sweeper

I’ll dance to the beat, shuffle my feet

Wear a shirt and tie and run with the creeps

Cause it’s all about money, ain’t a damn thing funny

They pushed that girl in front of the train

Took her to the doctor, sewed her arm on again

Stabbed that man right in his heart

Gave him a transplant for a brand new start

I can’t walk through the park, cause it’s crazy after dark

Keep my hand on my gun, cause they got me on the run

I feel like a outlaw, broke my last glass jar

Hear them say: “You want some more livin’ on a seesaw?”

A child is born with no state of mind

Blind to the ways of mankind

God is smiling on you but he’s frowning too

Because only God knows what you’ll go through

And your eyes will sing a song of deep hate

The places you’re playin’, where you stay

And you wanna grow up to be just like them, huh,

But then you wind up dropping out of high school

Got sent up for a eight year bid

Now your manhood is took and you’re a may tag

Spend the next two years as a undercover fag

Till one day you was found hung dead in a cell

It was plain to see that your life was lost

You was cold and your body swung back and forth

But now your eyes sing the sad, sad song

Of how you lived so fast and died so young

Don’t push me ’cause I’m close to the edge

I’m trying not to lose my head

Yo Mell, you see that girl there?

Yo, what’s up Money?

Yo, where’s Cooly an Raheim?

They is downstairs coooling out

So what’s up for tonight y’all?

We could go down to Phoenix

We could go check out “Junebug” man

Hey yo, you know that girl Betty?

Come on, come all man

That’s what I heard man

What’s this happening, what’s this?

Don’t nobody move or nothin’

Y’all know what this is (What’s happend?)

Oh man, we’re (Right in there) Grandmaster Flash and the Furious Five

What is that, a gang?

I don’t wanna hear your mouth

Officer, officer, what is the problem?

Get in the god… 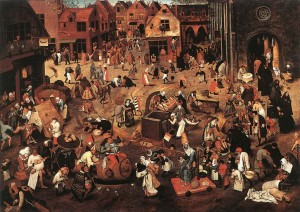 The “public sphere” refers to a social realm in which private citizens come together to discuss matters of common concern to form public opinions.

A portion of the public sphere comes into being in every conversation in which private individuals assemble to form a public body.

“a sphere which mediates between society & state, in which the public organizes itself as a bearer of public opinion.”  Habermas

The public sphere refers to a space created through discourse.

The public sphere does not refer to an institutional structure or physical location.