We kicked off the Spring 2019 semester with a visit from Dr. Roby Douilly, Assistant Professor of Earth Science at the University of California, Riverside. His BRiDGE2Impacts talk, Career Choice Influenced by a Tragedy: My Personal Story, described his trajectory in academia after a major natural disaster that impacted his life and the people of his country, Haiti. He described his life before the event and the major impacts it had on the decisions he made in the aftermath. 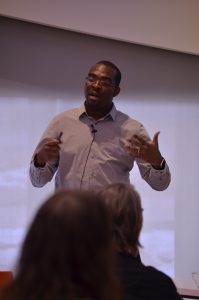 Haiti became the world’s first independent black republic and second independent nation on January 1st, 1804 after Toussaint L’Ouverture and Jean-Jacques Dessalines led the only successful slave revolt in history. We can recall the destruction of the earthquake in 2010, however we need to remember that prior to their independence, Haitians faced many more harms caused by men, not necessarily by natural disasters. The tragedy stems historically from multiple foreign interventions and chronic political instability that led to the weakening of the Haitian state and thus, acted as a primer for a force of nature that killed so many.

Dr. Douilly grew up in Haiti where obtaining a higher education was incredibly difficult. His parents greatly valued an education and made sacrifices throughout their lives to ensure that opportunities were available to him and his siblings. Both of his parents dropped out of school, but as parents, worked long hours to put their children in the best schools they could. It was evident their passion for an education passed onto Dr. Douilly as described by his efforts to seek a higher education and the value he saw in it — which likely helped him to become a dedicated educator today. Days after handing in his bachelor’s thesis in Civil Engineering in January of 2010, the magnitude-7.0 earthquake hit. More specifically, the initial shock hit southwest of the Haitian capital of Port-au-Prince at a registered magnitude of 7.0, but then was followed by two aftershocks registered at magnitudes of 5.9 and 5.5. In the following days, more aftershocks occurred (one at magnitude 5.9) about 35 miles west of Port-au-Prince.

Dr. Douilly showed us photos and videos of the effects of the earthquake that illustrated how underprepared the country was for such a destructive earthquake. Hundreds and thousands of residents were displaced and living in tent cities after the event. However, it was striking to learn and see that many Haitians were still living in the tent cities years after the earthquake. Hearing about the slow progress since the disaster and the remaining reconstruction that still needed to be done really forced us to open our eyes to the reality of international involvement and its effectiveness at helping a community after an event like this. With our current administration attempting to end Temporary Protection Status (TPS), people such as those from Haiti can lose the protection they seek, meant to aid those fleeing from war, hurricanes, earthquakes, or other extraordinary events that make living conditions dangerous in their country. Ending TPS could force up to 46,000 Haitians (U.S. Department of Homeland Security 2018 estimates) to leave or be at risk for deportation, split up families, and likely result in dangerous living conditions considering the current status that Dr. Douilly described. 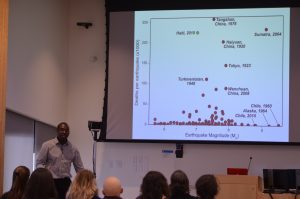 The people of Haiti were not educated about this type of natural disaster and weren’t aware of the consequences, according to Dr. Douilly. He realized that the lack of understanding of the earthquake hazard led to the destruction of so many buildings in the aftermath of the disaster, so he switched his studies from civil engineering to geophysics to help his country prepare for future natural disasters. He then pursued both a M.S. and Ph.D. in Geophysics at Purdue University in Indiana. I was even more proud to hear that we shared something in common—we both graduated from Purdue University. He conducted his post-doctoral research at the University of California Riverside where he is currently an assistant professor in the Department of Earth Sciences. The lack of data and information lead to the misinformation about the seismic susceptibility for Haiti, and Dr. Douilly strives to provide more reliable and accurate data back to this country. He regularly returns to Haiti to educate local scientists and the Haitian government officials on his findings and ongoing research that describes the plate tectonic movements around Haiti. He is harnessing his knowledge and skills to keep science alive in Haiti in pursuit of safeguarding the future of Haiti.

It was moving to hear his story and overall mission as a scientist to help his country. His decision to open up about his struggles, describe his trajectory, and share the impacts the earthquake has had on his life today reinforces the mission of BRiDGE—to bring people together and learn from each other’s obstacles. Everyone has a different story, and we all can benefit from listening and learning from one another. Dr. Douilly’s determination to continue to help his community with his research is motivating, especially for graduate students, as it demonstrates that scientists like him can truly make a change.