In 1961, needing help with huge calculations, the Chemistry Department spearheaded an effort to bring computing power to the University of Massachusetts; this early effort became the Research Computing Center.  I was first made aware of this historical beginning last spring when we OIT staffers began receiving email messages about a celebration planned for October that would highlight milestones on the journey from the RCC to OIT, the Office of Information Technologies, which we are today.   The day has arrived!

We enjoyed a 50th anniversary lunch at the Campus Center Auditorium, starting at noon, then at 1:30, we settled in our seats in the Student Union Ballroom to hear Dr J A N Lee present the keynote address on the topic “50 Years of Computing: From Humongous to Ubiquitous.”  Dr Lee, an elder statesman in the academic computing world, was Director of the UMass RCC from 1964-1965, and from 1964-1969 served as Chair of the nascent Computer Science Program.  There is a concise history of the UMass computer science program on the department website; by comparing the details presented on this page with those from the “milestones” link above, you can infer the bifurcation of academic and administrative computing, which Dr Lee felt was the right way to go.  Trained as a civil engineer in his native England, Dr Lee has an impressive curriculum vitae; I won’t attempt a synopsis here, as I’m sure to mangle most of the facts and distort his achievements.  Instead, I’ll send you to this short biography on the Virginia Polytechnic website (Dr Lee worked there for many years).

Dr Lee was here from almost the very beginning, and I found his remembrances of the early days of computing at UMass fascinating.  He spoke about both developments in the wider world of information technology and efforts to kick-start graduate and undergraduate degree programs in computer science at the University.  I was struck by his mentioning DTSS (the Dartmouth Time-Sharing System), as I myself used this in a computer programming course I took at Phillips Andover Academy in the summer of 1970.  I also had not heard the anecdote he related regarding the invention of email (?!) by the guys at Dartmouth who wanted to talk to the ladies at Smith.  Dr Lee spoke warmly of colleagues who are now legends (even though I was barely aware of the existence of UMass when they were moving and shaking things here, I’ve heard of them):  Ed Moore, Dick Stein, Cax Foster, Connie Wogrin.  At the end of his talk, he thanked the people who were mentors and inspirations to him, including Oleg Kerenski and Eugene Freyssinet.  I will not easily forget his parting advice, which had been given to him early on:  “Get thee to a man of perception; let your feet wear his threshold down.”

Back at Lederle LowRise, I wandered down the first floor hallway, reading the timeline, watching some of the StoryCorps clips, and exclaiming over the exhibits.  To give you a flavor of some of the contrasts between the past and present which were on display, I’ll present some stats on data storage which didn’t make it all the way into the exhibit.  These are courtesy of Bo Mack, Director of Administrative Computing Support Organization:

The Spire database, containing hundreds of thousands of student records, is 149 GB and currently fits on a disk drive less than 10 cubic inches.  The punched card equivalents of the Spire database would be

The current capacity of our administrative computing disk storage unit, Network Appliance Filer Model FAS3240, which takes up about 6 square feet of space, is 55 TB

Here is a gallery of photos from today’s events (the specific projects I’ve highlighted are ones that I’ve worked on here in OIT): 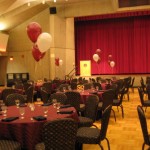 Lunch was served in the Campus Center Auditorium 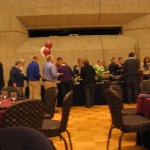 Former and current Computing Center staff lined up at the buffet 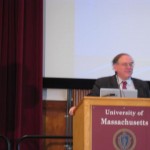 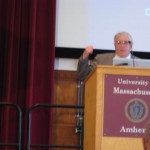 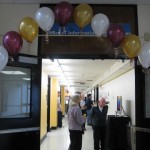 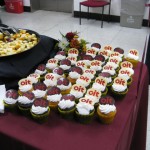 These OIT cupcakes were delicious 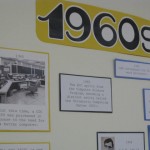 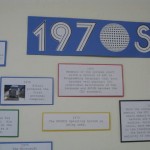 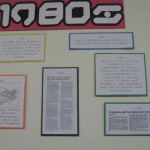 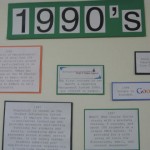 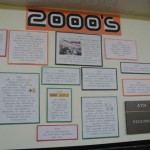 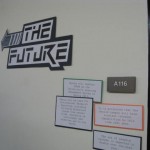 The future is ahead of us 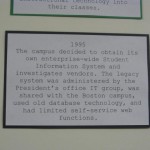 The campus decided to purchase a Student Information System package 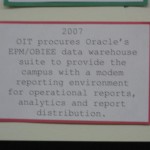 The campus decided to install a DataWarehouse software package 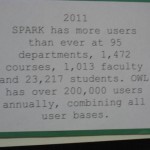 Spark has been the UMass Learning Management System for years 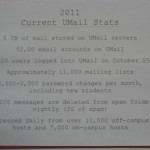 Email has always been one of the more popular applications, especially for spammers 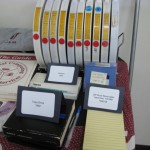 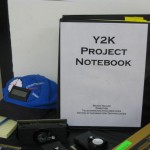 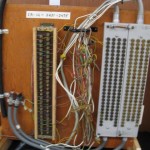 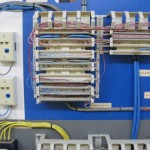 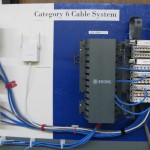 This is state-of-the-art telephony infrastructure

Many people worked tirelessly on this 50th anniversary project: by reaching out to former colleagues, donating artifacts, filming and editing video clips, and  performing all of the numerous other tasks which made the day a success.  I want to personally thank Heidi Dollard, Director of Administrative Applications and Associate CIO, for chairing the Celebration Committee and for doing such a wonderful job!  I feel proud to be part, a nano-part, of computing at UMass.