Touch a liquid surface with a sharp needle and pull it gently – the force you exert is essentially determined by the surface tension of the liquid. This classical capillary phenomenon was revisited in a recent paper, published in Physical Review Letters, when a thin elastic film floats on the liquid surface. The presence of a film increases the force that is needed to poke the interface, as might be expected. Surprisingly, however, it is not the 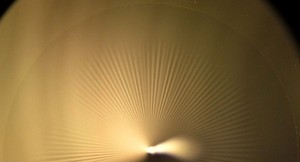 mechanical properties of the film that stiffen the interface, but rather the interplay between surface tension, hydrostatic pressure and the finite size of the sheet. This universal, material-independent response, is attributed to a novel geometrical concept that the authors call “asymptotic isometry”: END_OF_DOCUMENT_TOKEN_TO_BE_REPLACED

Imagine a liquid drop resting on the surface of a solid material. The classical picture, due to Young and Laplace, assumes that the drop rests on the substrate without deforming it. However, if the solid is sufficiently thin, the capillary forces affect its shape dramatically, yielding a pattern of wrinkles that emanate from the liquid-solid contact line (see attached figure). END_OF_DOCUMENT_TOKEN_TO_BE_REPLACED